Learning how to play piano will need a proper beginner equipment to start your journey and for those who just need a good item to polish our skills, an affordable option is necessary. Among those many offerings, Yamaha P45B vs Korg B1 can be a great options to go because they are built for anyone who want to have a dependable piano but with less to spend. If you are also considering these models, go check what they can offer to you below. 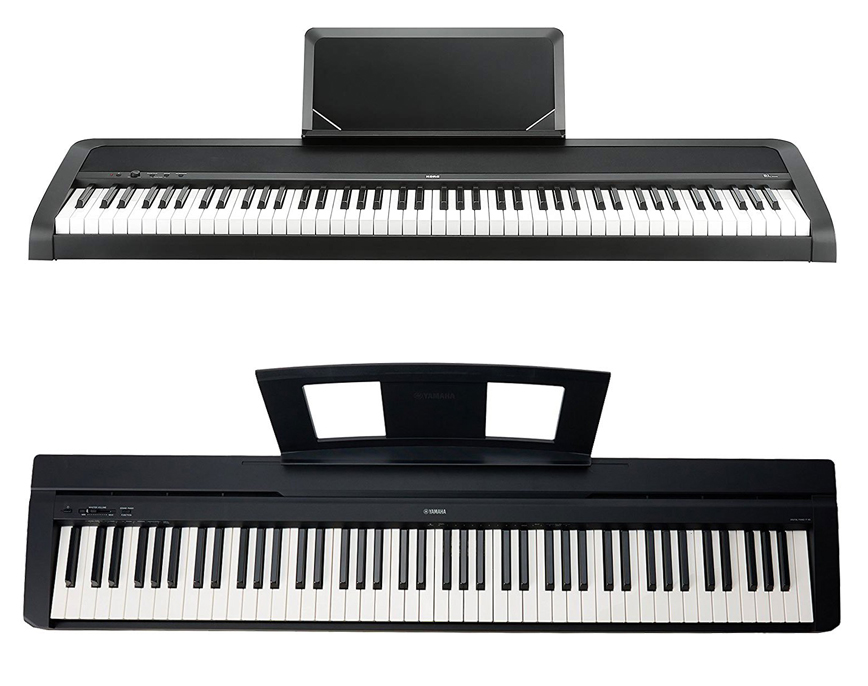 Beginner Piano
Piano is one of the most popular instrument we play today and it has been like that since long time ago. Children and young players are interested to play the instrument because they are interesting and versatile as well as fun. However, they are not the easiest instrument to play and actually among the hardest so most of us will need many years just to master some of the basic skills and even more years to learn how to play like your favorite artists.

When currently looking for an instrument for a beginner, there is a balance that must be found because we want an item with enough playability and features that won’t cause much confusion or intimidating for learners. In addition, we don’t want to spend much because as a beginner, spending much will be unwise and we still don’t know whether it will stay for long or not since we may lose interest a few months later and expensive pianos will be a waste in your storage room.

For older players who already have a sense and dedication to play a full instrument as well as developed body, the main consideration for your first piano will be the full keys type or the 88-keys piano. This full version is not only great to improve your skill and sense of playing, they are the same like an acoustic ones and is better if you plan to play them later after reaching a certain skill or having enough budget to purchase one.

Another reason to choose 88-keys is because complex songs are played with this type of piano especially those classic music so if you are learning those, an 88-key is a must have. For those who prepare to play an acoustic piano, choosing those with full keys will prepare your next stage since many pianos even for beginners out there are already featured with weighted keys so we can stimulate how the real things will feel when we get our hand on them.

About Yamaha P45B
If you don’t want to spend much time when looking for the piano that suit your preference, it is good to start looking for the most popular names in the market first because they are the most likely to offer good quality products and those loved by many other people also have a higher chance of pleasing or providing what we are looking for as well. Among those many options, Yamaha is what you want to check if you need a huge options to pick.

While they do have many great items in their catalogue, not all of them are suitable for beginner with limited features and available in a more affordable price point. For this specific level, we are sure many people will agree with P45B piano which is actually the P45 with the additional letter behind stating the name and it means black. This piano is very affordable and among the most popular to replace the former P35. Read also: Alesis Recital vs Yamaha P45 here.

Yamaha P45B Design
On the outside, this piano is looking like any other pianos on the entry-level with its 88-keys which is very similar to the predecessor and nearly identical. It has a nice and smooth plastic body and keys so they seem to also change the material in this model. It feels comfortable with a set of controls placed at the front top and they are fairly easy to understand with very little options and buttons to pick. Overall, there are not much we can do in this side.

Yamaha P45B Sound
As it has been mentioned above, Yamaha P45B is a full digital piano with its 88 keys and being one of the most affordable option in the market not preventing this model to also featured hammer action because Yamaha did put their well-known technology here. This technology called Graded Hammer Standard keybed and made for beginners who aim to play at a higher level. They are pretty impressive in mimicking the feeling but also not the best out there.

In addition, we can adjust the sensitivity up to 4 preset settings; fixed, soft, medium and hard. In each of this level from the lowest to highest, each press we do will generate a different volume and as you can expect, the hardest level will provide the widest dynamic range which mean we have to strike the keys really hard to produce a loud sound.

As for the sound, Yamaha P45B is accurately capturing the sound of an acoustic instrument and indeed deliver a high-quality samples known as AWM dynamic sampling technology. It is created by recording the sound of their full concert grand piano at different dynamic level which is amazing for a piano in this price point. On the polyphony count, similar like many other beginner pianos out there, this model is also using 64 polyphony count which is double the amount of its predecessor P35.

Yamaha P45B Additional Featured and Connectivity
On the function part, this piano is featured with dual mode and duo mode. These two may sound similar but they are different because dual mode is layering a sound with another sound while duo mode is splitting the keyboard into two equal sections that have the same pitch ranges. As for the connectivity, they are set to be minimal with only USB type B terminal, audio jack and sustain pedal jack.

About Korg B1
We have so many options and before deciding on what you want to purchase, it is better to look around first and check if there are other options that suit your preference or a similar thing that available in a more affordable price. If you like the kind of capabilities in Yamaha P45B, you may want to check one of their competitors from Korg which is the B1 piano. While the manufacturer is not as popular as let’s say Yamaha or Casio, they are still one of the best out there.

Korg B1  is a digital piano for those who want to spend less but don’t want to scarify the features as well as the sound quality because even at such an affordable point, this piano will still able to satisfy a lot of piano players.

Korg B1 Design
From the outside, this model is very humble and compact with a straightforward control which is good to let beginner get comfortable with the unit faster and thanks to the long speaker placed at the front face of the piano, it can add more character that setting it apart from many of its competitors out there. Weighing around 26 pounds and having a slim figure also beneficial for players who plan to carry the instrument around from one gig to another.

Korg B1 Sound
Similar like P45B from Yamaha, Korg B1 is also a full 88-key digital piano and they are also using real hammers to create the feel and response to be as similar as possible with an acoustic piano. With this feature, the keys will be heavier on the low-end and lighter on the high-end since it is created to mimic the individual weight on the real instrument. This technology is called Natural Weighted Action and to make sure we can set it depend on our skill, there are 3 presets here.

Those adjustments are lighter, normal and heavier with the normal being the default action. As you may already know, the highest adjustment level will need a harder press to produce a powerful sound while the lightest option only need a light touch to produce the same level of sound. As for the polyphony, this model is equipped with 120 polyphony count that will allow the users to play complex classical pieces.

Korg B1 Additional Features and Connectivity
On the additional features, the piano doesn’t have either split or dual mode but it has partner mode which will be helpful to split the keyboard into two equal parts with the same pitch ranges and allowing the player for a side by side practice. As for connectivity, it only has 2 jacks; one for headphone and the other for line out so we can connect the piano with external amplifier or speakers.

Comparison
Now, let’s compare Yamaha P45B with Korg B1. As you may already know, these two are separated mainly by how many polyphony they have and the connection as well as additional feature while in general Yamaha P45B is offering more yet it also have less polyphony which mean, it has higher chance of dropping off notes than Korg B1.

Conclusion
All in all, both of them are very similar to each other and equally a good options for any beginner trying to polish their skills. However, if we are to choose, we will recommend you to pick Yamaha P45B because this model is coming with more connections and additional features.

Tweet Pin It
Tags:Yamaha P45B vs Korg B1
techbuckarch.com Copyright © 2022.
Theme by MyThemeShop. Back to Top ↑