Electric or digital piano is a very ideal option for any students or musicians who want to keep things compact and versatile. If you are looking for digital pianos that won’t ask so much from the pocket but also sound nice, Yamaha P125 Vs P45 are two ideal choices to go. These brothers may look identical but they are packed differently so make sure to check our article below to see which piano will be your best companion based on what you need from them. 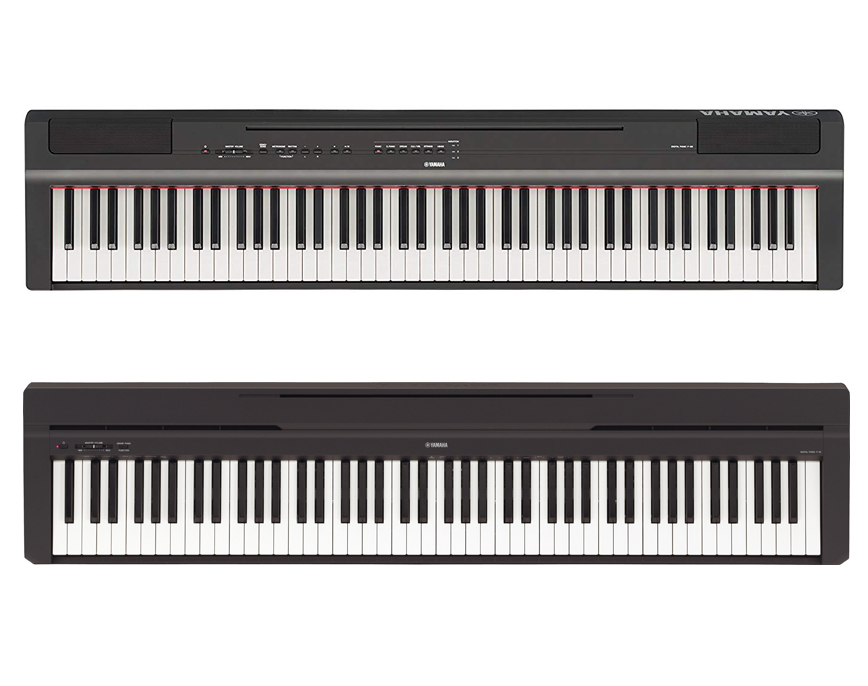 Piano as Popular Instrument
We are sure that almost everybody will agree that piano is the most popular instrument probably standing side by side with the affordable and versatile guitar but, we know that deep down, piano is surpassing all other instruments in the hearts of music lovers. Its sound is not only pleasurable to listen but also incomparable in terms of experience for the player as well as their audience. However, we also understand that people’s preferences are different so we may not have the same taste.

Pianos is dubbed as one of the most loved and learned instruments by many of us because it is unique and many of its characteristics can’t be found on other instruments out there but, the most prominent reason probably because of its incredible, unparalleled range since it can cover all 88 notes of the musical scale. Unlike many other instruments, it can go higher and lower in frequency while teaching both treble and bass clef at the same time which other tools only offer one.

Piano itself is training the players on all four harmonic parts of music when other instruments mostly only allowing the player to play one note at a time. The reason why it is more often thought when players are younger is because after learning piano, it will be easier to understand other instruments, making it a good start to have. In addition, it can help people stay focused as they age because playing the instrument train our mind and push us to have maximum coordination from mind to hands and feet.

Acoustic Vs Electric Piano
The problem with piano is the expensive price because the whole acoustic instrument is not the most affordable home décor or entertainment we can just purchase anytime. Depend on the quality, they will be priced quite high up there but, worry not because having the real instrument is not the only one to master the skill to play a piano. Since the early 1900s, electric piano has been emerging and probably more popular today due to its fairly affordable price point.

Many of them are coming at hundreds of dollars depending on the model, especially the features and sound quality. While price is a very important point to look at, electric piano also shines the brightest when it comes to space occupancy due to the compact size and overall lighter board for those who travel between gigs. Unlike acoustic piano, they also have a wide array of instruments or sounds, making them versatile for any genre you play or any mood coming into mind. 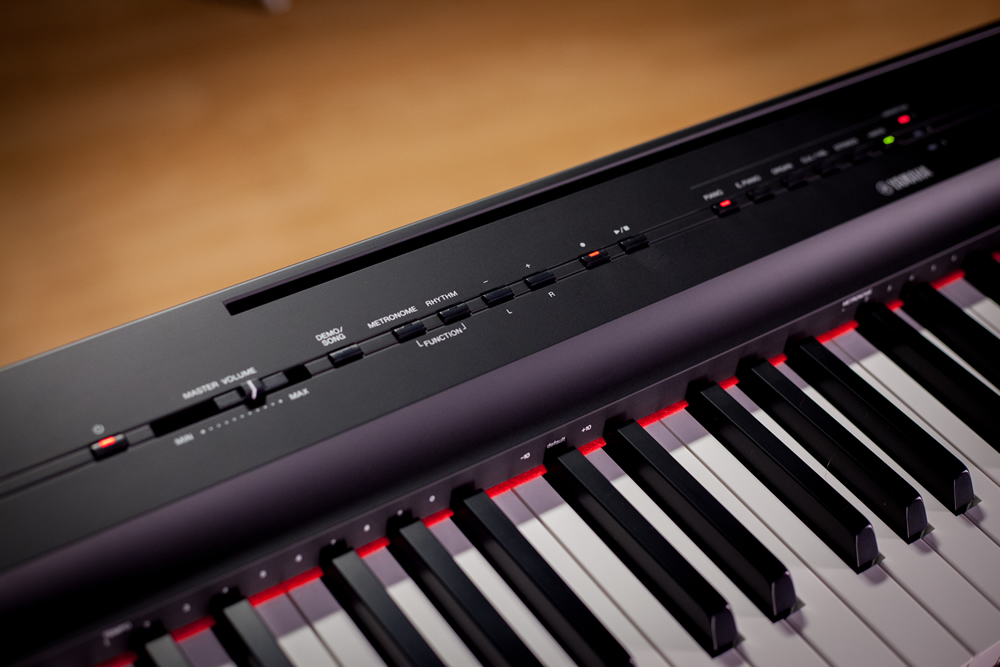 About Yamaha P125 and P45
Just like many other digital instruments, electric pianos are offered by so many brands out there and while they are able to produce sound, it doesn’t mean that all of them are good and when it comes to which sounds better, it can be very personal. However, we can always rely on big names to offer both high quality and affordable products like what Yamaha does with their collections. This experienced company has been around for quite some time and continue to upgrade their products to be better.

This includes their piano which are very popular among both beginners/students and those whose experiences are already helping them afford something. One of the most well-known piano line from the company is P line and this collection is covering the Portable version of their instruments, mostly marketed towards students or anyone who wants to get an affordable instrument to play at home or to practice their lessons and polish the skills everyday without having to pay so much on the real instrument.

This P line has so many models and two of the most loved by many are the P125 and P45 which are closed brother in terms of quality but different as well due to the difference in price and as the name suggests, the P125 is a higher unit and meant to replace the older P115 which is also liked by many. It is placed in the midrange in comparison to entry level P45 and if you ever used or play the older version, this model should not have much differences as well.

Many of us were looking forward to P125 when it was announced back then in 2018 and do hope to see or found much upgrades from the older piano but while it sure does have some better parts than P115, the overall instrument seems doesn’t change much. On the other hand Yamaha P45 is a true budget instrument, released as an answer to Casio’s Privia line and comes with weighted keys as well as pleasant sound based on its AWM sampling technology.

Yamaha P125 and P45 Design
As any full size electric pianos out there, Yamaha P125 and P45 are coming with full 88-keys on board and sporting the same black and white style. The former have a white fashion in case it is more of a preference to you but the latter only have the black version despite some models are called P45B, making us wonder if there is actually white version of this unit. Weighing around 25/26 lbs. we are sure anyone older than 14 years old can lift and carry these pianos just fine.

Placing them side by side, they also have the same length and width at 52 inches wide and 11.6 inches deep while the instrument is about 6 inches thick from top to bottom. They still have the same speaker layout placed one at each side but the front panel is different since P45 control panel is kept as simple as possible with only a few buttons/sliders and the P125 has more to push or use to access whatever features/sounds included inside.

Yamaha P125 and P45 Keyboard
Coming further, let’s see the keyboard on these pianos and if you ever used other Yamaha’s pianos priced below $1000, the keyboard technology will be mostly GHS and it is not different from any of these pianos. Graded Hammer Standard is a very popular technology they used on the more affordable piano and as the name suggests, there are hammers inside to produce the same feeling of pressing a real acoustic piano so we can get used to the dynamic range.

These keys are touch sensitive as well and as many other similar pianos like Casio PX 160 Vs Yamaha P45, this is a preset that we can change according to 4 different settings including deactivating it altogether. The highest setting or Hard will give you the widest dynamic range where keys have to be hit very hard to produce louder sound as well.

Yamaha P125 and P45 Sound
As for the sound technology, Yamaha P125 and P45 we are sure that you are familiar with AWM dynamic sampling on cheaper pianos and this is what they used on the latter which is taken from full concert grand piano at different dynamic levels to produce stereo sound, as similar as possible. On the other hand the big brother P125 is using a higher sampling technology called Pure CF Sound Engine and this is preferable because it is taken from CFIIIS 9’ Concert Grand.

What’s special about this technology as an upgrade of the older P115 is now the tone uses 4-layer sampling as opposed as 3. This seemingly little addition is enriching the sound and making it more natural for example damper resonance, string resonance, and key-off stimulation. On the polyphony notes P45 only comes with 64 notes in which the former is already at 192 notes meaning there is no chance of dropped notes despite 128 already cover most of it.

Yamaha P125 and P45 Features
On the additional features, Yamaha P125 and P45 are coming with dual and duo or duet mode while the former also have split mode. Dual mode is layering the instrument sounds across the keyboard to create a rich atmospheric sound, duo or duet mode is a function to split the keyboard into two identical parts with the same octave ranges or have its own middle C. As for the Split mode, this mode allows us to choose one zone for one instrument and it is not available in P45.

Comparison
We are sure that Yamaha P125 and P45 are an interesting pianos to bring home but they are also different since P45 is an entry level and overall it has the basic sound engine as well as don’t have much features and sound collections which P125 offers up to 24 sounds in which the latter only have 10. The big brother also have slightly louder and better speakers in comparison to fill a room and give a different experience.

Conclusion
Choosing between these pianos is very easy since they are quite different and in general it can be said that the P45 is meant for the budget version and novice users who doesn’t need many sound collection while P125 is for more experienced players or anyone who is going to need the pianos versatile sounds.

Tweet Pin It
Tags:Yamaha P125 vs P45
techbuckarch.com Copyright © 2022.
Theme by MyThemeShop. Back to Top ↑