Piano might be the most popular instrument to learn but it is also the most versatile for composing since we can access lots of sounds from one piece of tool. For those who are recording their songs, Yamaha MOXF8 Vs MX88 will be a nice synth to complete your setup or as a stage piano and to help polishing your skills. However, before shopping for one, see what we can expect from them so then we can see which model will fit your application the most. 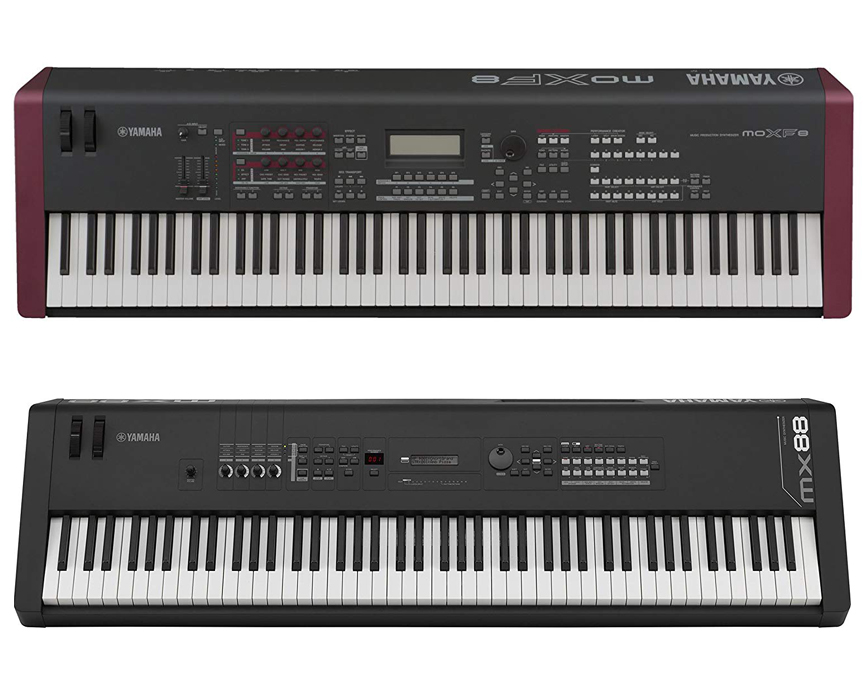 Acoustic Piano and Digital Piano
Most of us have favorite instrument or sound that we love to hear when appearing in a song because they are beautiful or unique. It may depend on your personal taste but it is also true that piano is one of those instruments with a very attractive sounds especially the acoustic ones. The problem with acoustic piano is not all of its learners can afford one whether because it is too expensive or because it needs special care since we know that the real instrument is fragile.

For those who live in an apartment or any similar establishments, an acoustic piano will cost much space and the vibration may disturb your neighbors as well, moreover, they do need tuning once in a while to stay sounding nice. All of them are fixed with digital piano so it is not surprising to see more people have this electronic version rather than the real instrument. They also available in a wide range of price so we can choose the one that match our skill level or budget.

Digital Piano and Keyboard
However, just like when choosing almost everything, shopping for digital piano, keyboard, or synthesizer can be quite frustrating because these are what we are faced with when going to a store or scrolling through those online platforms recommended list. It can be very confusing at first because not only separately, some of them are even combined into one. Digital piano and keyboard are the most popular when it comes to what we often heard but they are quite different.

The former is meant to mimic acoustic piano as close as possible so there will be less features or sounds in it for example like Yamaha P125 Vs P45. Keyboards on the other hand is available in various forms and very rich in features which include another familiar model called synthesizers, arranger keyboards, and MIDI controllers, etc. Portable keyboards is the one most often confused with digital piano but instead of having hammer action or full keys, they only have 61, 76, or 73 keys and semi-weighted or non-semi-weighted keys.

On the other hand, there is another popular keyboard being used today and it is called synthesizers which is often found on hobbyist, enthusiast, or professional setup. As the name suggests, they are made to generate or copy a wide variety of sounds so we mostly use them in production activity. The reason why they can make any sound is because they come with a set of basic waveforms and pre-recorded sounds that we can build together or alter their attack, sustain, and decay as well as release time. 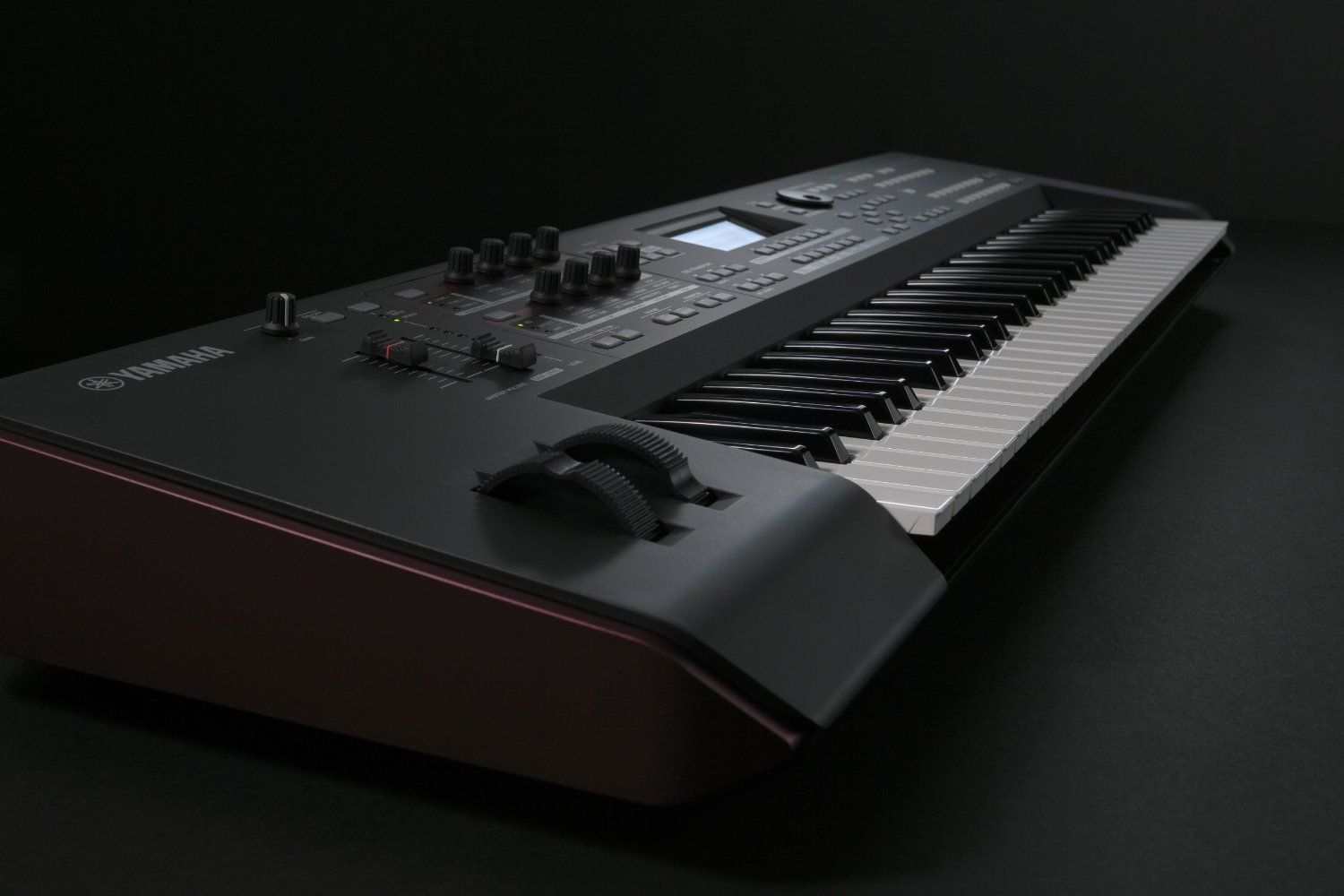 About Yamaha MOXF8 and MX88
A keyboard synthesizer is not for beginners or learners because it has different goals and the goal is to construct sound in which we will be using for composing. They are mostly used by professionals so we can expect to see quite a wide range of price and most of them sure are expensive so it is best to at least set a budget limit first when planning to shop. Additionally, you may want to see what being used by similar users to make sure of the quality and reliability.

While it can be confusing to make a good decision, you will never wrong with relying on Yamaha products because everybody knows that this giant has been around for quite some time, has a long history of providing the best electronic instruments, as well as competitive in price competition. Besides beginner and experienced digital pianos, they are also one of the best for synthesizer options with various keyboards to choose from those in entry-level to those cost higher for more professional performance.

If you are looking for synth that won’t drain your wallet or as a first workstation, Yamaha MOXF8 and MX88 will be a very ideal choice to check out. Both of them are the most popular from the family line and if you are familiar with the well-known MOTIF synth, you will also love these two little brothers that while not as capable as the higher keyboards but are still powerful enough to be a great addition to your setup.

On the other hand, the MX series is also welcomed very well into the market and the most loved is probably this MX88 keyboard which is very similar to MOX line since it is using the technology from Motif XS workstation.

Yamaha MOXF8 and MX88 Design
When you check these synths, the first thing you may notice in comparison with MOTIF is their material because the big brothers are rigid due to being wrapped in steel yet these two are made full of plastic. But, you don’t need to worry because these are hardened and not the flimsy type often seen on cheap digital pianos. Similar to many synthesizers, there are a wide array of buttons, knobs, and rotating wheels in either of these models combined with a simple, small analog display in the middle.

What caught our attention the most is how pretty Yamaha MOXF8 is because it has a purple sides which add a good contrast to the whole keyboard. They are not light but still travel friendly for they are approximately measured at 52-inch wide, 16-inch deep, and 6.6-inch tall while the weight is similarly around 30 to 32 lbs. As you can see, they are also coming with full 88-key keyboard for a full experience.

Yamaha MOXF8 and MX88 Keyboard
Moving further, let’s see the keyboard here and as you expect, we are finding the popular GHS or Graded Hammer Standard here just like in many other Yamaha’s piano which is actually great for a synth like Yamaha MOXF8 and MX88. This means the keys are weighted and is meant to mimic the real experience of playing the acoustic piano and when you press them, the lower keys will feels slightly heavier compared to the higher keys so we can literally play them as digital piano as well.

Yamaha MOXF8 and MX88 Sound
For the sound section, in our opinion, this is what sets them apart the most because as it has been mentioned above the former is based on Motif XF and the latter is based on Motif XS. MOXF8 comes with up to 741MB of wave samples and combined with Expanded Articulations which actually every single sound from the workstation. It has 128-note maximum polyphony and a 16-part multi-timbral capacity as well as more than 1150 tones.

There is VCM or Virtual Circuit Modeling engine which is going to allow you to layer up to 8 voices and add a specific effects chain to each one of them. The catch is we will also be able to enjoy almost all of these on MX88. On the sound collection, since the latter has smaller ROM, especially the acoustic guitars mode will somehow sounded duller in comparison.

Yamaha MOXF8 and MX88 Features
The last but not least part we want to talk about these synth is on additional capabilities aside from the sound and this is also what sets them apart, probably more than just the different bases for their sound technology since in real life they sound very similar to each other. First is convenient because MOXF8 has A/D inputs for your microphone and external sound sources if any, which is not available on the later so we can’t record vocal or instrument directly to digital workstation.

It also means that the synth is acting as audio interface as well for any of your external sound sources. Additionally, the MOXF8 will allow you to expand the storage to store various additional waveforms that is very interesting feature to consider if you are going to use flash board. MX88 however, has 3rd party libraries with samples may not available yet in your board.

Comparison
Both of Yamaha MOXF8 and MX88 are a very reliable workstation for anyone who wants to start their journey or replace their old and worn out keyboard. The difference is in sound based but it is very subtle and what matters is in the expandability and inputs as well as some other capabilities like pedal controls and sequencing which makes MOXF8 a better keyboard in general compared to MX88.

Conclusion
All in all, there is no bad choice between them and it is more like choosing the suitable workstation for your application. If none of the plus side of MOXF8 interest or will be useful in your activity, MX88 is a more affordable pick yet, if you need them then Yamaha MOXF8 is the better choice.

Tweet Pin It
Tags:Yamaha MOXF8 vs MX88
techbuckarch.com Copyright © 2022.
Theme by MyThemeShop. Back to Top ↑