Just like with many other things, having a good equipment will elevate our overall experience whether you want to learn a skill or polish them to be better including when you are playing an instrument like a piano. Yamaha as one of the biggest player in the industry offers many great options for you such as Yamaha DGX 660 vs P125. While they are indeed sounds equally nice, there might be some differences on the other aspects, so check our article below before purchasing one of them. 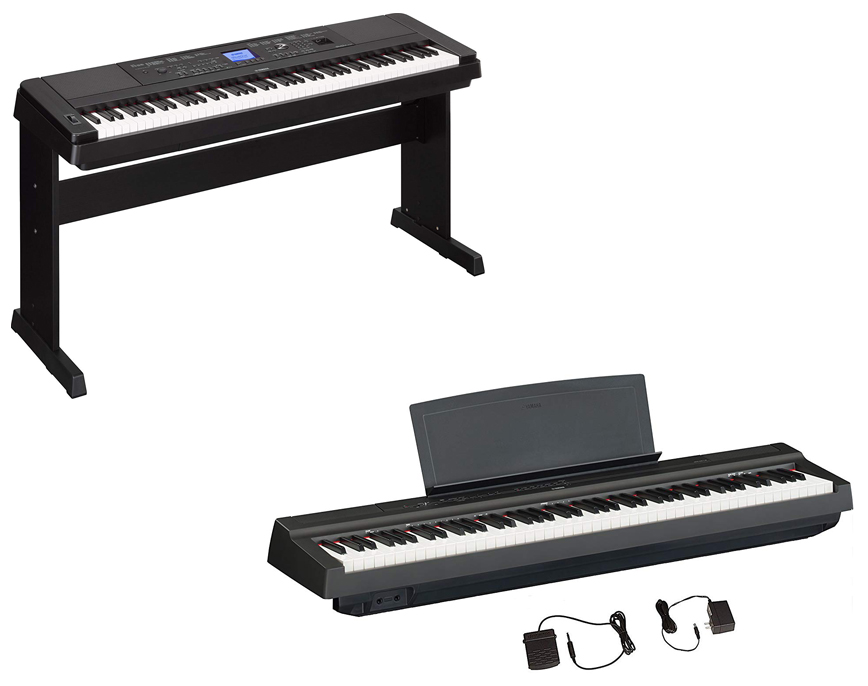 Piano Popularity
As a child, we used to be encouraged to play an instrument we like the most by our parents because it is indeed good for children development and it is fun as well. Some of us are learning seriously while some other do it just to pass the free time, no matter what your motivation were, playing an instrument is not a very easy thing to do. Now when we are a bit older, we may already have the basic skill in hand and what’s left to do is polishing those skills.

Among those many musical instrument out there from different categories and level of difficulties, piano seems to be the most or favorite instrument since long time ago and of course today as well. In the United States, it is roughly more than 20 million of Americans are able to play the instrument and one of the biggest reason why it is the first choice of many people is probably because they are easier to start with or to play right away.

It is true that to play a piano all we need to do is pressing the key and make a sound unlike other instruments like violin or flute in which we have to control our hand movement and breath just to produce the correct sound. A well-tuned piano will sound good from the start without any need to press it too hard or too soft depend on the keys. Because it is easier to play, new learners will pick up on the fundamentals of music pretty quick compared to other instruments.

Another reason why it is very popular because the piano is a more fulfilling instrument to play than others since it is among the few that allow the players to play both the melody and the accompaniment at the same time. The ability to play more than one note at a time will be simply satisfying to beginner players. In addition, learning the fundamental concepts on a piano is also easier such as the half steps, scales and chords.

When it comes to choosing the instrument, one thing that often and probably the most important beside the sound quality is the keys because as an adult, we need to purchase the full 88-keys one since more complex songs are going to be played with this type while children or smaller learners can pick those with less keys to make sure they are not going to be overwhelmed by the piano.

About Yamaha DGX 660 and P125
After you are already deciding which piano to choose, now is the time to look for the perfect unit for you because while all of them are indeed capable of producing sounds, we may need to look for another capabilities or quality level matching your preference. Yamaha is one of the biggest manufacturer of musical instrument in the market so it is not surprising to see both beginner and professional owning one of their series since their quality is trusted.

Another reason why Yamaha can be your good option is because they have a large amount of option which making the selection process easier and differentiated by the price range as well as level or features so we can match them with our current capabilities. If you are already in intermediate level or want to find a piano to improve your playing level, Yamaha DGX 660 and P125 is here for you.

As you can see from the sample picture above, both of them are a full size digital piano and just like the name, they are actually the improvements of the previous models, DGX 650 and P115 which in both series two of the popular units. What has been upgraded in both models is capabilities such as increased polyphony, sounds, effects and features that mainly we can see on DGX 660 while P125 seems to be very similar to its predecessor but we will talk about it later.

Yamaha DGX 660 and P125 Design
From the outside or design alone, we can easily set them apart because DGX 660 is overall a bigger version of digital piano you can find in the market and it is clear that it is not made just as digital piano only but as a composer keyboard as well due to the bunch of controls we can found and it is even featured with a screen in the middle. At the other hand, P125 is very simple with a row of buttons above the keys to control and make adjustment.

Comparing the two, DGX is not only bigger but also heavier about 46.3 pounds in which the P125 only 26 pounds, so in term of portability, it is not going to be very friendly when you need to transfer the piano from and to your gigs for example unlike the compact Yamaha P125. In option, both models however, still available in two color schemes; black and white while for the DGX 660, we will get a matching stand as well.

Yamaha DGX 660 and P125 Keys
Moving to the keys, both digital pianos are actually very similar in this side because besides being similarly featured with full keys, they are also using the same weighted action keys and in these models, Yamaha is still using the Graded Hammer Standard or GHS. This technology is actually used on the P line so pianos like P45 and P115 will have the same technology as well. GHS made the pianos have a heavier touch at the low end and lighter feeling to the high end. 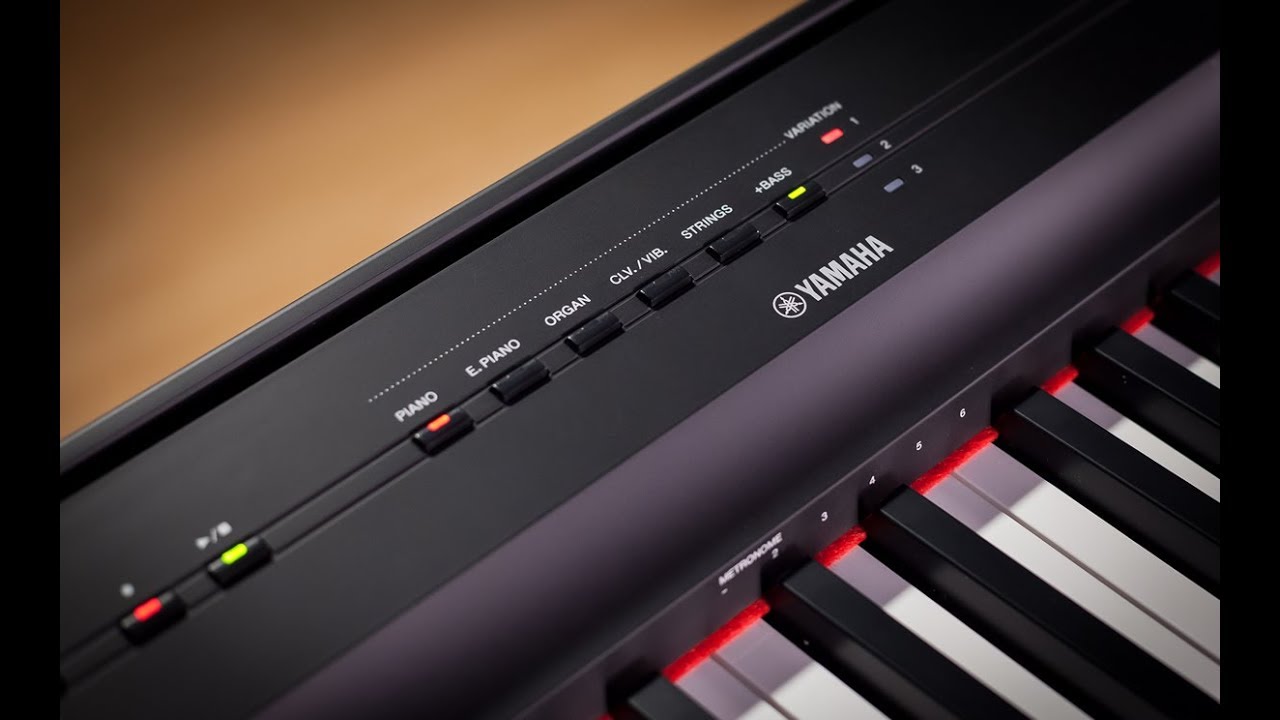 Mimicking a real acoustic piano makes these piano a good option for anyone who want to play the real instrument later or planning to purchase them in the future because we can train based on real experience so we won’t be very surprised when handling the real piano. Like many other weighted keys, there is also an adjustment to change the sensitivity in Yamaha DGX 660 and P125; we can set them from Fixed, Soft, Medium, and Hard.

The fixed setting is going to deliver the same sound whether you are pressing the keys softer or harder while the hard setting will require you to press the key harder to produce the sound. As for the keys quality, both models are using the standard plastic keys with no texture to match the price range.

Yamaha DGX 660 and P125 Sound
Moving to the sound quality, Yamaha DGX 660 and P125 are using the same engine as well and it is the Pure CF sound engine which is very common in many affordable pianos by the brand and the same as well with those from Arius line like YDP 143B. If you are interested to check this line, we have compared it before in Yamaha DGX 660 vs YDP 143B here. Comparing P125 with its previous model P115, the sound on this version may be a bit more pronounced in middle register and overall brighter.

Still on the sound part, the prominent difference between these piano models is the collection because DGX 660 is a composer piano and in the piano collection only, it is already packed with 10 piano sounds while P125 only have 4 sounds. Comparing the sounds, DGX has 554 instrument sounds in total including 12 electric pianos, 14 organs, 5 accordions, 14 guitars and many more while at the other hand P125 has 4 electric piano, 4 organ, 5 clavichord and vibraphone as well as strings and bass.

Yamaha DGX 660 and P125 Features
On the features side, DGX 660 is richer but P125 also have what not present in the other. Both have duo and split mode which used to layer and play different sounds on the piano, two at once while the duet or split model only present in P125 and this feature will split the piano into two section with the same pitch to play together or to teach and learn. DGX 660 at the other hand is featured with audio playback and auto-accompaniment.

Comparison
Now, let’s compare Yamaha DGX 660 with P125. As you may already know, the difference between these two pianos from Yamaha is mainly on the sound collection and additional features because in general DGX 660 which also act as a composer or arranger keyboard have a wider sound collection to accompany your creativity while P125 is more into the digital piano side with sufficient yet smaller amount of sound collections.

Conclusion
All in all, the decision is all yours because we may have different need. However, in our opinion, P125 is more suitable for those who doesn’t need a wide collection of sound or not very interested in composing with digital sound while DGX 660 is a perfect option for you who plan to arrange music with the piano.