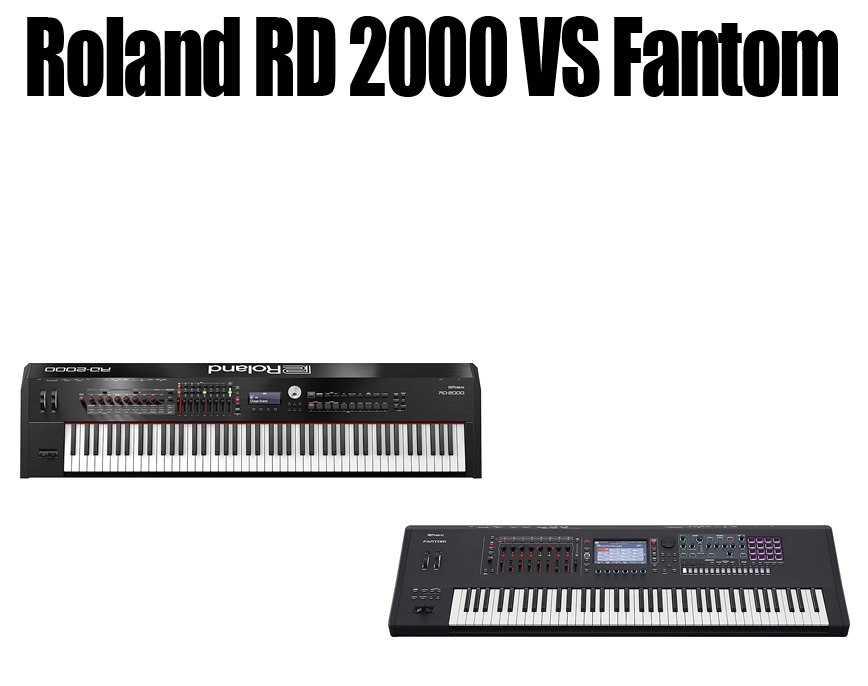 Roland is one of the most popular options when it comes to digital piano and workstation because they carry some of the best instruments in the market with the budget and professional grade equipment such as Roland RD 2000 Vs Fantom series. These pianos are similarly powerful and sound amazing but they are meant for different users so for those wondering which of the two will be the better choice, let’s see what they can offer here.

Digital instruments vary widely that it can be confusing to choose one when you are not sure about what to get. There are so many good options to consider based on what you want to have or what you will want to use them for. When it comes to digital instruments, you either want the best sound or the best usability but it can be both too. Electric piano or non-acoustic piano for example can be designed for different purposes.

When it comes to electric or digital piano since they are not using the acoustic mechanism to produce sound, in general the core is very similar to each other. They are basically keyboards where each key responds to a certain action and in this case the action is sound. It happens as you press the keys and to make this system work, you will need electricity to power the whole machine. It is almost like regular keyboards on computers.

As for the sound collection, depending on the model or instrument it is usually pre-recorded or sampled from an acoustic piano so the manufacturer needs to record the sound of their preferred piano in different plays and then work from the file to deliver similar sound on their digital machine. Of course companies can design their machines accordingly as well because sampling is not the only solution and the more advanced technology can rely on modeling as well.

Whether or not the sound feels more natural or significantly better from each other is highly dependent on the engine that they use and each manufacturer usually has their own with their signature sound. The playability of non-acoustic piano on the other hand is mostly resulted from the keys that they use. As expected most of them are made of plastics and this is not only cost efficient but also lighter and easily modified. The experience will be different from playing an acoustic grand piano for example.

But, companies can bridge the difference using better keys. Roland, for example, has PHA-50 which is a combination of plastic and wooden structure to mimic the experience of playing a real instrument. In addition, pianos are also commonly used in music production where adjustability comes from. The instrument that is used in this application will have more features in general because users want to have something they can tweak further than just the common sounds. The processing of this type of piano will be much more complicated.

About Roland RD 2000 and Fantom

Just like when considering anything, it is best to match your application with the product. When it comes to digital piano there are options ideal for learning and playing the instrument in general, for live application, and for composing purposes. Of course you can find the options that can be used for all of them but usually we have to sacrifice something to achieve the other. It also highly depends on the budget because oftentimes it is easier to shop based on how you want to spend.

For those who want more functionalities from their instrument, the stage piano, arranger keyboard or workstation will be very ideal. They are not only going to sound good but also carry lots of features in which you can utilize them for tweaking the sound or designing it according to your taste. The price range is usually above beginner and mid-range digital pianos but most companies have them such as Roland who is already famous for the professional grade equipment.

They also carry a wide range of options based on what the unit is designed for such as the popular Roland RD 2000 and Fantom series. The series we will be talking about today is Fantom 7 and as expected, there are two other lower and higher options of this series called Fantom 6 and Fantom 8 that you can check in our Roland RD 2000 Vs Fantom 8. The two are some of the most capable pianos from the company but the latter is noticeably a different type.

They are coming from different lines and meant as different categories where RD is a stage piano made for live performance while the Fantom line is a workstation keyboard. The main difference is located at the core of these pianos because as a tool for arranging music it needs to have great control. Nowadays DAWs are more prominent so the workstation like Fantom becomes richer to improve the usability and in many cases, bridging the line between stage and studio, making them a versatile solution for many. 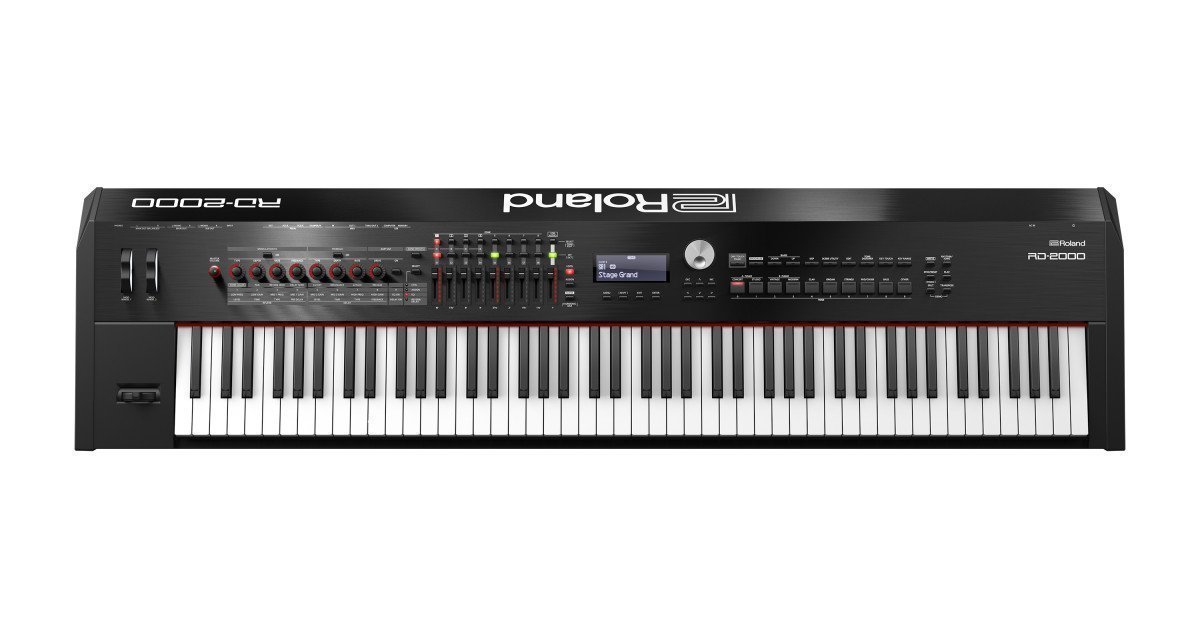 As the smaller model, as you can see the Fantom 7 is more compact but it is not by much and if you get the Fantom 8, it is actually larger than the RD 2000. The smaller keyboard comes with 76 keys arrangement and since this is meant for composition, the amount of keys is not as crucial as in digital pianos. The build quality is great and they are equally robust with prominent plastic housing their internal components in an angled shape.

The interface is also more sophisticated than those in typical digital pianos but as a synth/arranger/workstation the Fantom series have larger display that will support the ease of use when you want to design. The most noticeable feature from the Fantom series is the pad on your right which is missing from the RD line. However, functionality wise we do think both of them are equally complete and should be useful in application. All of the buttons, faders, and knobs feel good to operate.

Moving further to the most important part, let’s see what these pianos can offer. For this comparison we are talking about the Fantom 7 which is the budget model of Fantom 8 and if you want the best keys, we suggest getting the higher-end model. We recommend Roland RD 2000 or Fantom series 8 for the PHA-50 keys since Fantom 7 only has semi-weighted keys, the same as Fantom 6. PHA-50 is superb hybrid technology that combines plastic on the outer layer and wooden keys beneath it.

It is currently one of the few best keys in the market for how natural it feels. It is a bit lighter compared to a grand piano but definitely up there in terms of quality, moreover they have this ivory surface which prevents slip and promotes a more natural feeling. It is also featured with escapement or the subtle notch when you press the key halfway down in order to further enhance the experience. Additionally it has 5 types of touch sensitivity and offsets for better control. 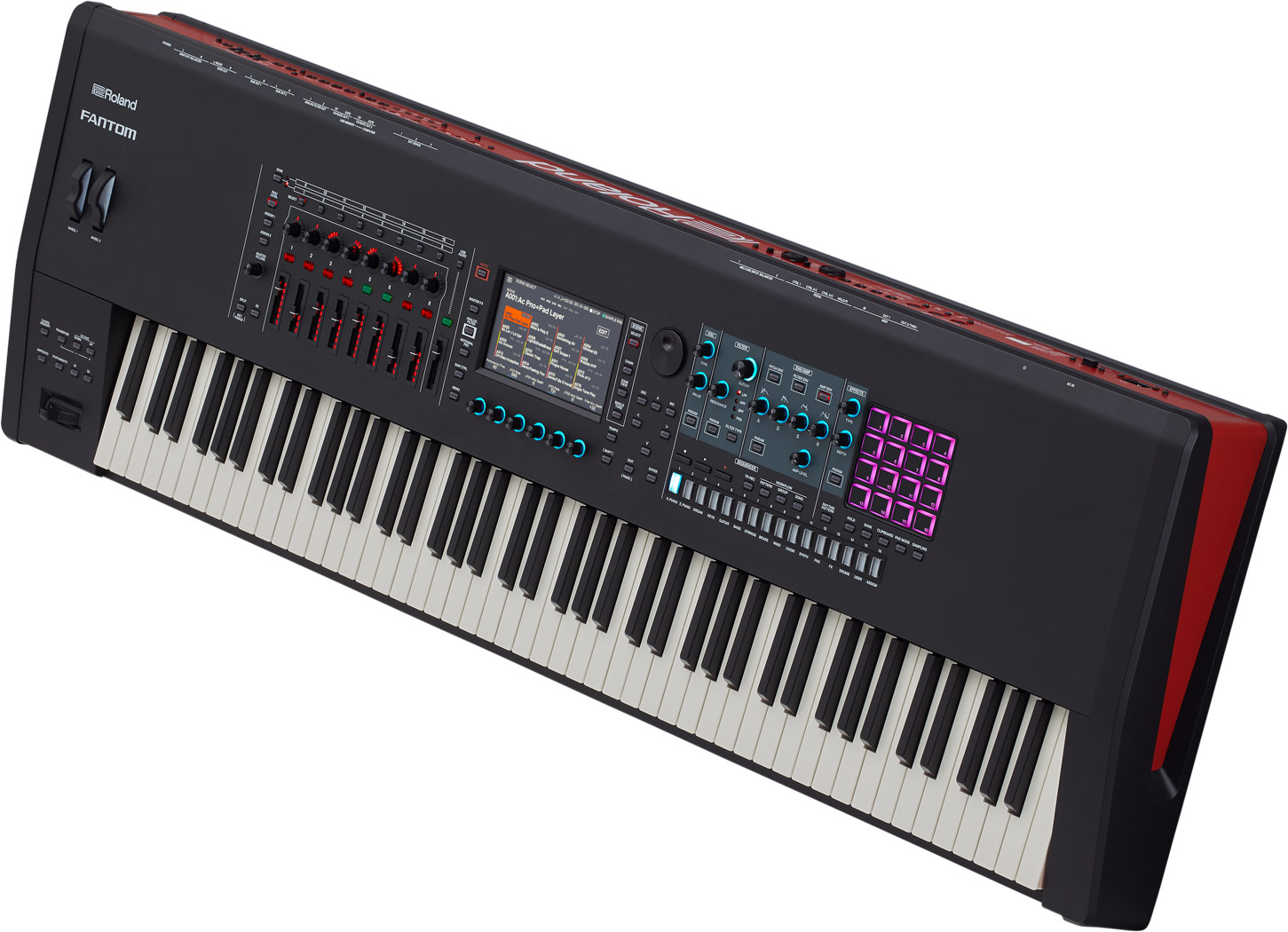 Now for the core of these pianos, both Roland RD 2000 and Fantom series are quite different because while both of them are coming with SuperNATURAL and V-piano engine, the synth Fantom line also have this ZEN-Core engine and thus, you can guess that the two offer a combination of modeling and multisampling. ZEN-Core is the star here because it is fundamental to the Fantom line and some of the Jupiter pianos. This technology differs from the previous ACB used before.

The ZEN-Core is combining modeling component behaviors while adding PCM waveforms and effects to the sound engine which then decouples technology from its hardware and software to make the sound easily moved from one keyboard to another. It is an entire ecosystem that uses ABM to model how an instrument sounds while playing it and how it interacts with each other.

As for the ease of use, both Roland RD 2000 and Fantom series are rich enough to offer almost whatever you need. There are enough knobs and buttons to allocate the functions and they are meant for experienced users so we don’t think they are going to look as attractive for the learners. None of the Roland RD 2000 and Fantom have speakers but you can plug headphones or audio out on them. They also support a wide range of connectivity including to computers.

There are so many good digital pianos for various applications and these two are meant for professionals. The Roland RD 2000 and Fantom series are similar but different, with Fantom 7 being cheaper than Fantom 8 but it is still quite expensive compared to RD 2000 which is not cheap either. The difference will be in the sound designing and abilities since Fantom series is made for this application while RD 2000 has better usability, especially convenience in live performances.

The choice is all yours based on which seems more useful in the application but unless you will need something that is extremely capable of sound designing the RD 2000 is more than sufficient for many people, moreover it has better keys and much cheaper.

Tweet Pin It
Tags:Roland RD 2000 VS Fantom
techbuckarch.com Copyright © 2023.
Theme by MyThemeShop. Back to Top ↑