Digital pianos like Rockjam 88 Vs Alesis Recital are ideal for casual and learners because they are affordable and sound good. The electronic appliance is also convenient for almost every player but, different instruments will also provide a different experience. These pianos are often chosen for their price and overall qualities so if you wonder which gives better value, let’s see what they can offer below. 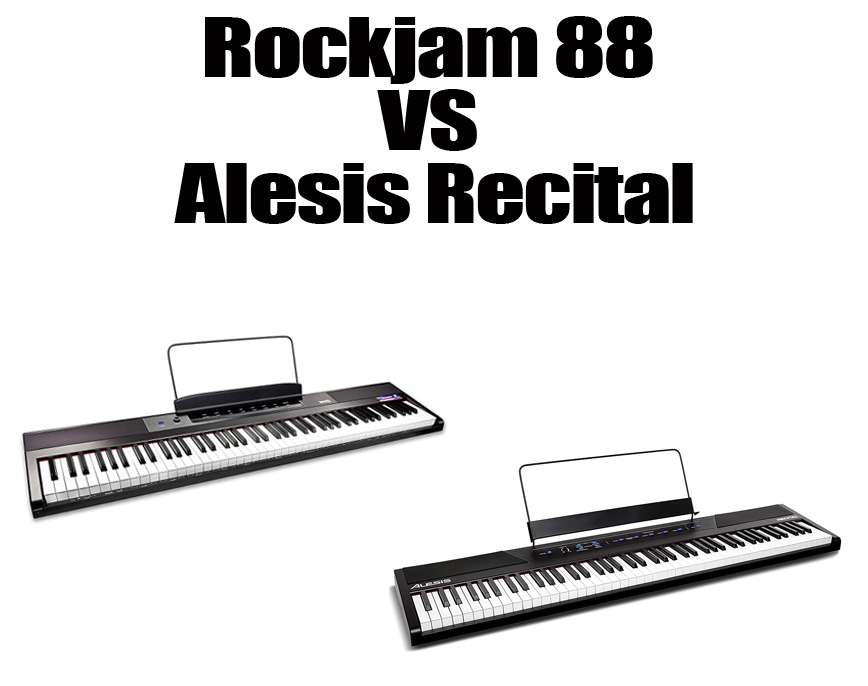 When deciding to learn something, there is always a chance of losing interest in the future, including learning an instrument. Whether it is a very young player or a grown-up adult, our interest may change from time to time. Musical instruments like a piano are expensive if you buy the acoustic variant. This is why the digital piano is invented, to give options to a wide range of people who want to get to know the instrument or to accompany their playing session at home.

Are digital pianos suitable for a beginner? The primary market for digital pianos is usually beginners or students and casual players. The instrument is much cheaper than its acoustic variant, so it is a good alternative if you lose interest later. Just like most products, the experience with a digital piano may vary, depending on what you want to aim for. Many of them can mimic the acoustic pianos well to help students develop the skills such as touch-sensitive and weighted keys.

For serious players who will be playing on the actual instrument later, these features are necessary to have, probably even more important than the excellent sound itself. The real piano keys are touch-sensitive, so the harder you press them, the louder the sound will come. Since digital piano doesn’t have the same sound-producing mechanism as acoustic piano, this feature must be emulated to mimic how the keys feel on a real piano. Real pianos’ keys are weighted differently, so lower and higher register keys will feel different when pressed.

About Rockjam 88 and Alesis Recital

Digital pianos are suitable for beginners, and we can choose the piano model that seems to be the best choice for what you want to aim for. Young players and casual piano learners who want to know the basics of how to play the instruments will be fine with entry-level models like Rockjam 61 Vs Alesi Melody 61 will be good options. But, if the player or student will be playing on a real piano later, it is wise also to get a model that can mimic or simulate the experience.

The digital pianos with such capabilities are typically not as cheap, but they are a worthy investment. Some of the best and favorite companies to look for at Rockjam and Alesis. These names may not be as famous as Yamaha or Casio, but they tend to be noticeably more affordable. The models you want to consider are Rockjam 88 and Alesis Recital, which are full-size digital pianos. Are 61 or 88 keys better? 88 key pianos are almost always better at mimicking the actual instrument.

There are no limitations on what you can play with this amount of keys. The 61 keys only have 5 octaves which are not always enough for some pieces, so the player will need to adjust the music sheet to match the instrument. For musical experience, the 88 keys like Rockjam 88 and Alesis Recital will deliver a better musical experience. Not only coming with full-size keys but these two are also featured with some necessary features to explore your musical skills.

We think the pianos are suitable for beginners who plan to play real instruments later. Does the Rockjam 88 and Alesis Recital have weighted keys? They are not fully weighted like on P45 from Yamaha or the P71. But, it is good enough to help simulate the feel. In comparison, they are on par with each other, but Recital is currently offering a better value for your budget because it is similarly good and is noticeably cheaper than Rockjam 88.

While there is only so much a budget piano can offer, we don’t want a lackluster product, and both Rockjam 88 and Alesis Recital are far from cheap looking. These 88-keys pianos are made entirely from plastic, but they are robust and should last for years with proper application. The fashion is also much simpler compared to their 61-keys variant. There is a control panel on top, and instead of being filled with extensive buttons and a list of rhythm or sound, they are kept neat and straightforward.

The surface where Recital places its buttons is made of some brushed metal which may attract debris or fingerprints. Unlike their lower models, these pianos come as instruments only, minus the stand and chair or other accessories. They are featured with a music sheet or tablet holder and speakers on each side of the unit. You can add a sustain pedal on Rockjam 88 and Alesis Recital, but they are not included with the purchase.

As mentioned above, some digital pianos are better because they are designed to mimic the real instrument. As for the Rockjam 88 and Alesis Recital, the two are coming with semi-weighted keys. Semi-weighted keys capture the best of both worlds and work well too on these pianos. The technology uses spring, which creates a slight resistance to the press and is still pretty light. This soft feeling at the end of the press is somehow cushiony.

This impression will not be a problem for a beginner piano and should give players an idea of how the keys in real piano feel. But, these pianos may not feel as enjoyable to play for experienced players or those who have used better weighted or semi-weighted keyboards.

Next, we also want to talk about the piano sound. We assume most people will often play this sound with the instrument, and they sound pretty good for the price point. You can check their sampling from the website to know how good the piano sound. They are rich and have a warm nuance that is a sign of well-sampled recording. We also don’t notice a delay when playing more notes with these pianos. As for the sound collection, the two only have several compared to their 61-keys. 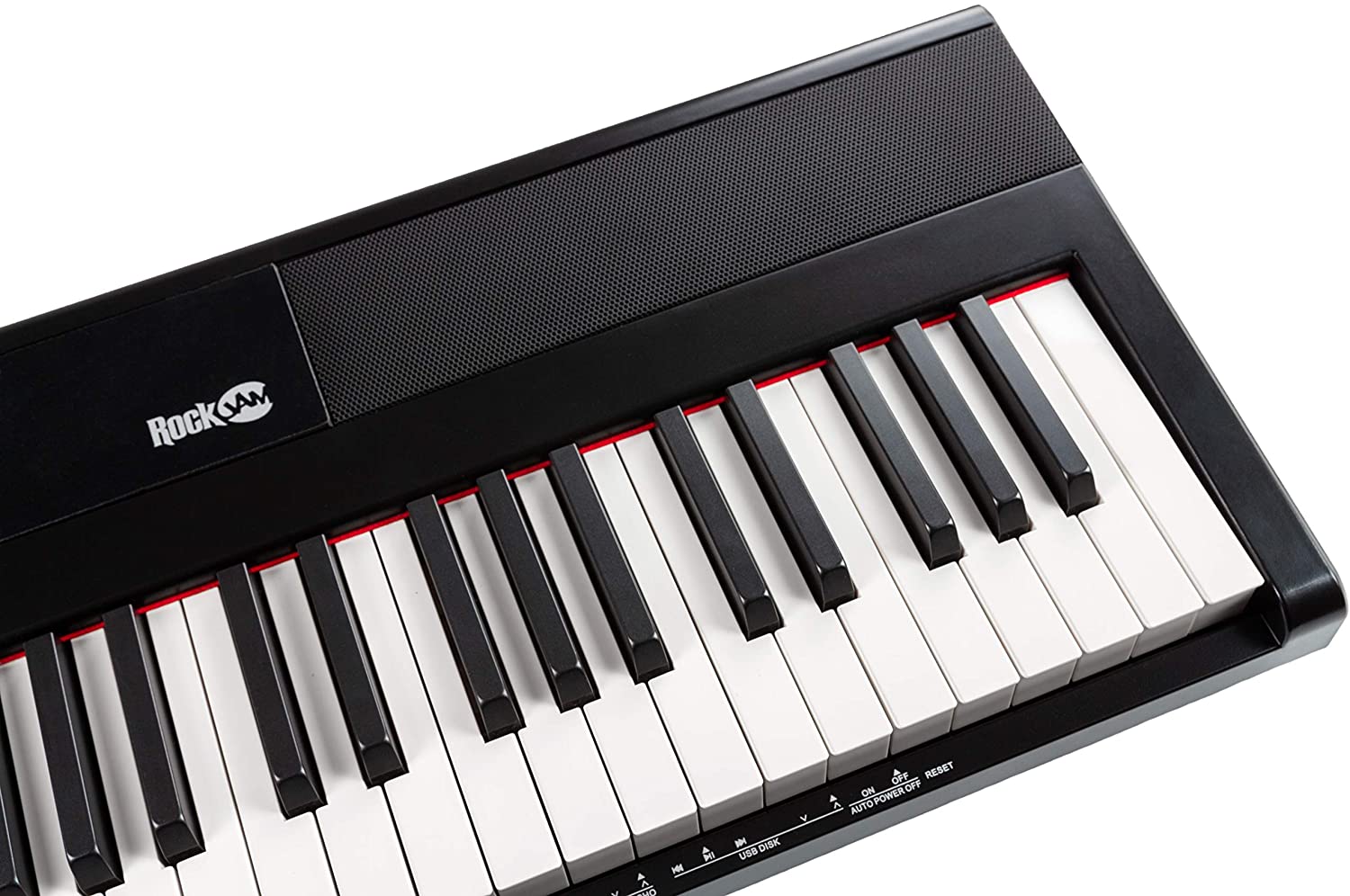 Alesis, for example, offers electric piano, synth, organ, and bass aside from the piano tone. In contrast, Rockjam 88 offers grand piano, strings, electronic piano, church organ, Hammond organ, bass, guitar, synth, and drum kit. We can also add a sustain pedal to the pianos for a richer sound. As for the polyphony, both Rockjam 88 and Alesis Recital come with 128 notes which should be enough for beginner to intermediate players to play complex pieces.

Rockjam 88 and Alesis Recital also feature built-in speakers to make these pianos convenient. The speaker is useful to let you play more naturally and hear the sound resonating in the room or when you want to play for others. The speakers are also loud enough, but Rockjam packs slightly more power with its dual 12W of speakers pumping 24W of volume. The Recital is also loud and clear with its 20W speaker system to drive the volume or, you can also plug headphones to play quietly.

Another port you can find on these pianos is a USB port to plug in your other device. This is very useful to connect the pianos and use them as MIDI keyboards for your Digital Audio Workstation control. It is making the instrument highly useful for experienced users too. Additionally, if you love singing and want to sing while playing the piano, there is a microphone jack here, but the microphone is not included.

Last is for the features in Rockjam 88 and Alesis Recital. Just like most beginner pianos, there are split and layer functions here. As the name suggests, split means splitting the piano into two identical parts. Each side can play different sounds so that we can play both simultaneously between left and right sides. On the other hand, the layer is a function that layers your piano sounds, meaning pressing one key will produce two sounds simultaneously to enrich your song.

These pianos are good options for anyone who wants to start their lesson or play casually at home. They are very similar, with good sound quality and semi-weighted keys. The sound is pretty good, especially the piano voice, because they are similar to many mid-range options on this aspect. The keys are decent for a semi-weighted system, but they are far from the best if you are looking for one that can mimic the real instrument. Aside from the main qualities, you also get to use these pianos as MIDI.

There is no wrong option here because Rockjam 88 and Alesis Recital are equally excellent choices for learning the instrument. We recommend Recital because it is currently more affordable and comes with all the necessary features and good sound and keys.

Tweet Pin It
Tags:Rockjam 88 VS Alesis Recital
techbuckarch.com Copyright © 2022.
Theme by MyThemeShop. Back to Top ↑