A good digital piano doesn’t have to be expensive because Rockjam 61 Vs Alesis Melody 61 are two exciting options for budget shoppers. These pianos are designed for beginners or young players interested in learning how to play the instrument. Not only compact, but these pianos are also coming with everything you need to start the journey. Curious about what they can offer? Let’s see which piano you may like better here. 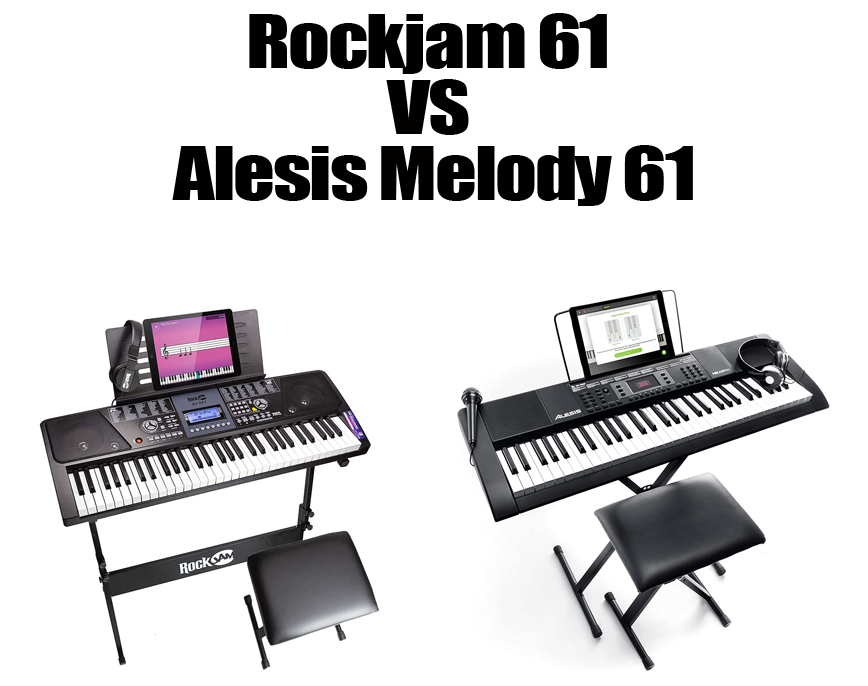 Playing a musical instrument is fun, and it is also often beneficial in the long run, especially when the children grow up or as we age. The most popular musical instruments to learn today are still piano and guitar, probably for many reasons, such as the beautiful sound and how easy it is to start with. Piano and guitar are also widely available, and the fact that you can sing with them is probably one of the biggest reasons why the two are played by so many people worldwide.

The piano is generally easier to start with because, unlike a guitar, the instrument only requires you to press specific keys to produce good sound. While the piano is more accessible to start with, the actual instrument is far more expensive than a good acoustic guitar. An acoustic piano is also not maintenance-friendly because there are costs in the long term to make sure they work properly. As a solution, people are making digital pianos that are cheaper and easy to maintain or transport.

What’s the difference between a keyboard and a digital piano? Digital piano is also often called a keyboard, but this electric instrument’s main focus or purpose is to mimic the sound of a real piano. They are often designed to provide a similar experience to an acoustic piano, including weighted keys. On the other hand, the keyboard is meant to produce various sounds. They are often used as arranger instruments, have lighter keys, and don’t have natural piano sound.

About Rockjam 61 and Alesis Melody 61

Is it okay to play piano on the keyboard? Yes, both instruments will provide an essential basis for playing an acoustic piano, but the digital pianos are usually better to naturally emulate the experience. This is often preferred by students who want to take the traditional way and plan on playing or buying an acoustic piano later. For young students and casual players, any electric piano type will be helpful, and they don’t have to be expensive either.

Examples of inexpensive digital pianos that can be an excellent starter for learners are Rockjam 61 and Alesis Melody 61. These pianos are currently offered for less than $200 and are popular among casual players. Many people probably use the rating to decide their option, but these pianos are pretty different. Our first good impression of them is the package because usually you only get the piano but here, we also get the stand and even chair. 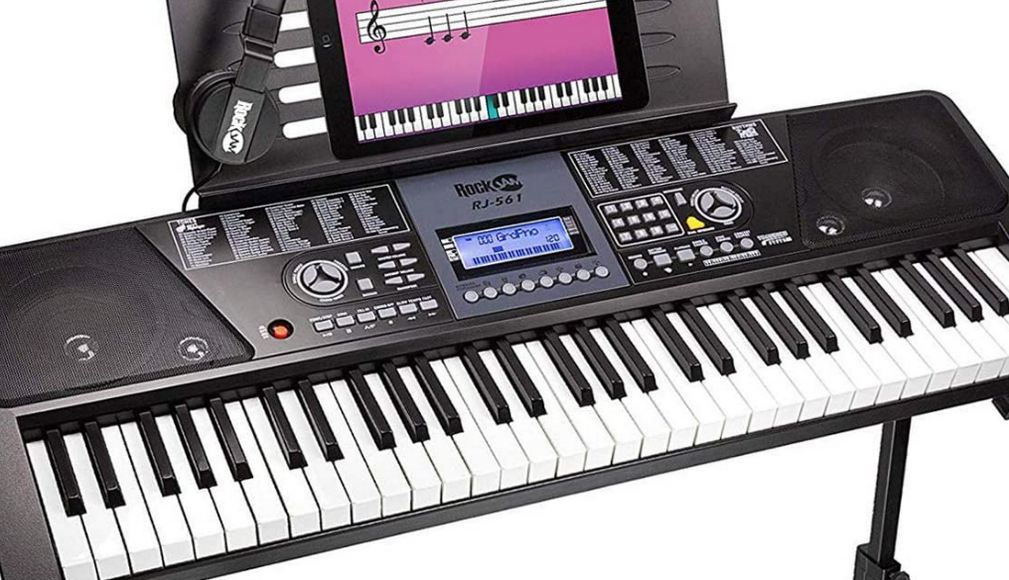 The Rockjam 61 and Alesis Melody 61 are perfect for introducing piano, and they are also compact. With only 61 keys, students or young players don’t have to spread their hands because the keys should be enough to play a wide variety of music from pop, rock, jazz, and even classic pieces such as Baroque and early classical pieces. In comparison, these pianos don’t sound the same, which is essential in deciding which you may like better.

For example, from the sound quality alone, the piano sound of Rockjam 61 or RJ561 is better or closer to what entry-level, and mid-range digital piano usually sounds. However, we like the Melody 61 better when it comes to the key action. It can be subjective, but the keys are more solid in this piano. Overall we think the Rockjam 61 and Alesis Melody 61 are similarly good options, depending on what you want to focus on, the sound or the keys. Read also: Alesis Recital Vs Rockjam 61 here.

Being a 61 keys digital piano, these two will be very compact, and as mentioned above, the setup comes with a stand and seat; the Rockjam 61 even includes a headphone in this kit. The two help us start right away, and this type of kit is perfect for people who don’t want to spend more on the accessory they may need. The pianos are made of hard plastic and are decent in build quality. They are also featured with a music sheet or tablet holder.

Our first impression of Alesis is how clean the interface is compared to Rockjam 61. The control buttons are much simpler, and there is not much information. It is pleasing to see, but seeing each button with clear information is a lifesaver in an actual application. It takes time to memorize what Melody 61 will do, so for the interface, we like what Rockjam did for their pianos. Additionally, the display is brighter and has more information shown.

Because we are talking about a musical instrument, let’s see the sound quality of Rockjam 61 and Alesis Melody 61 first. The two are generating the sound from the sample, and they sound pretty good but also far from typical mid-range digital piano. From the ears, only the Rockjam 61 produces a better piano sound than Melody 61. It is a bit warmer to the ears and not as artificial. Overall, they are excellent for beginners, but not if your main goal is to replicate the acoustic piano.

Next is for the keys, where Melody 61 flips the comparison. None of Rockjam 61 and Alesis Melody 61 use weighted keys like many entry-level and mid-range digital pianos. Starting with Melody 61, these keys are featured with little springs, so there will be some resistance when you press them. Its pressure feel light on hand and solid too. On the other hand, Rockjam 61 keys feel a bit cheaper and generate more mechanical noise while pressing the keys. 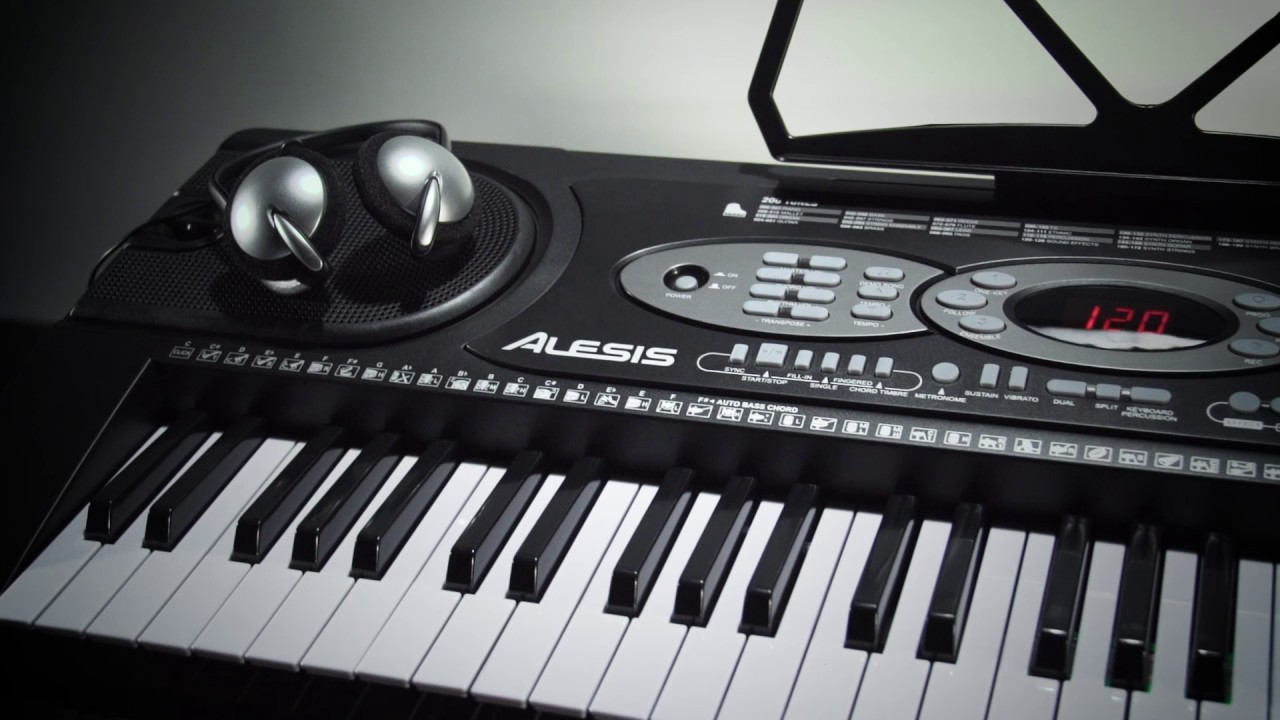 The most noticeable feeling is while both Rockjam 61 and Alesis Melody 61 use springs, the mechanism in this Rockjam piano is outdated. The keys will feel more resistance as you press down on them, so it is more difficult to learn basic piano techniques with the piano.

Next, we want to talk about these pianos’ responses, which is usually not an issue with many entry-level and mid-range digital pianos. But, it is different for these different models. Pressing one to three piano keys will not be a problem, but Rockjam 61 starts to introduce some delays the more notes you are trying to press at once. This may not be an issue for young players and people who play only one to two notes but for those playing with two hands, it can become hard to ignore the delay.

This may affect how you will use the instruments later. We think while sound-wise, the Melody 61 is just decent, the key action and low delay are much better than Rockjam 61. This will allow you to play a serious or more complex piece with the instrument, especially if you keep the instrument for many years later with much better technique and experience.

Not only piano sound, the Rockjam 61 and Alesis Melody 61 can produce many other sounds to play with. All of the collection and features are accessible from the control panel, and this is why we think it is necessary to have a user-friendly interface. In this part, Melody 61 is not as convenient because the labeling is not as good as Rockjam 61. For the Rockjam, every button and collection are clearly labeled so even the parents or people who know nothing about the instrument will understand the function.

Lastly, for the additional features, both Rockjam 61 and Alesis Melody 61 are coming with some valuable functionalities. They have built-in speakers and a headphone jack to play silently. There are also layer and split modes to try. Layer mode is layering two sounds so we can play them simultaneously, and split mode is separating the keys into two equal sides and playing a different sound. Both pianos are also coming with a record function for playback.

There are many budget options to consider when starting with the piano lesson. Rockjam 61 and Alesis Melody 61 are ideal alternatives, and they are fun to play as well. The main differences are sound, key action, responsiveness, and user interface. Rockjam 61 sounds better as a digital piano, but the keys are not as good for learners. It feels cheaper and has different resistance as we press deeper. It also introduces some delays the more keys we press at once, but the user interface is better and easier to understand.

Rockjam 61
- The RockJam 561 keyboard piano super kit includes a digital keyboard with 61 full-size keys giving you that traditional piano feel whilst maintaining a portable and compact design that can be powered by either mains power (power supply included) or batteries
- This RockJam 561 piano keyboard features an LCD display panel that both displays and engages the 100 rhythms, 50 tones, teaching functions, and 30 demo songs that are part of its functionality
- The RockJam 561 electric piano has record and playback functionality allowing you to build layers to your sound.
- This music keyboard super kit package includes a keyboard stand that is sturdy in design and can be adjusted to suit keyboard piano players both young and old
Shop now at Amazon
Alesis Melody 61
- Feature Packed Digital Piano for Beginners – Portable Electric keyboard piano with 61 premium piano style keys and built in speakers for practicing and performing to your friends and family
- Premium Electric Piano Keyboard Sounds - 300 voices (including Acoustic Piano, Electric Piano, Strings, Organ, Synth, Drums and much more); intuitive Layer and split modes to develop your keyboard skills
- Practice Makes Perfect - ¼” stereo headphone output mutes the built in speakers; 40 Demo songs; accompaniment mode with 300 built-in rhythms; built in record feature for recording your performance
- Powerful Educational Features - Skoove 3 month premium subscription for interactive online piano lessons; 2 months of live video lessons from TakeLessons
Shop now at Amazon

There is no wrong choice, especially for beginners and new casual learners, but we will recommend getting the Melody 61 if you keep the piano for longer. This model has better keys which are better for playing more complex songs.

Tweet Pin It
Tags:Rockjam 61 VS Alesis Melody 61
techbuckarch.com Copyright © 2022.
Theme by MyThemeShop. Back to Top ↑