In the article below, we will see the comparisons between Casio SA-76 Vs SA-77. Both are easy to use because it has only 44 mini sized key. It is really useful for the beginner who doesn’t have any abilities in playing piano. Even so, both of these two models have almost the same features and specification, but it has different price and colors. 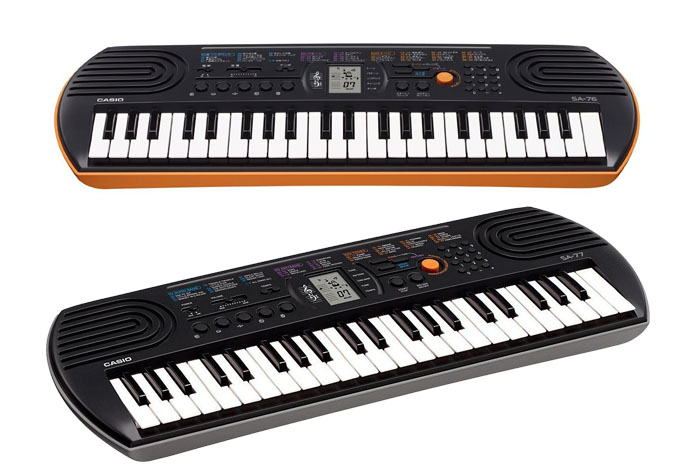 Features
Both Casio SA-76 and SA-77 almost has the same features. Casio SA-76 and Casio SA-77 have an LCD to show the song, the number of the song, and also the tempo of the music. We can choose the easy sound because both of them have keys for the Piano sound and also Harmonium /organ. See also our article about Casio CTK-2550 vs CTK2400 here!

Both Casio SA-76 and SA-77 has 44 mini-sized keys and has 5 percussion pads. It makes the beginner easy to play the instrument. It also has handling holder to make us easier to move the instrument.

Specification
Casio SA-76and casio SA-77 almost has similar specification. Two of them have 44 mini-sized keys which are really nice for the beginner. It also has 100 sounds and 50 rhythm patterns. The power Supply specifically designed for Casio Keyboards. The Stickers also can turn any keyboard into an easy to play instrument instantly.
Casio SA-76 and SA-77 are equipped by the speaker. It is also equipped by Headphone/output (jack stereo mini 3.5 mm, externals (9,5V DC). It is really nice to play around with another device which hooks in through the headphone jack. Between Casio SA-76 and SA-77 has 1.4 kg weight, it doesn’t include the batteries. It uses the Batteries AA x 6/AD-E95100L.

And for these two models almost have the same features and also have the same specification. But, for the color, Casio SA-77 has two colors of the product, they are grey and orange. But, for Casio SA-76, it has only single color, it’s orange.

Conclusion
While these two models are really simple and easy to handle. These two models are the perfect option for you who are the beginner in playing piano. You can choose for both because they almost have the same specification and almost has the same feature. But, for the price, it’s a little bit different.