Piano has been a very popular instrument since long time ago and keep attracting many new players into the team. This is making companies keep releasing their newer and improved products to keep up with the market and one of them is Casio. Two of their popular beginner electric pianos are Casio CTK 3500 vs 44000 with similar yet also different on some of its sides. If you are curious or currently confused about which to choose, go check our article below to see their difference. 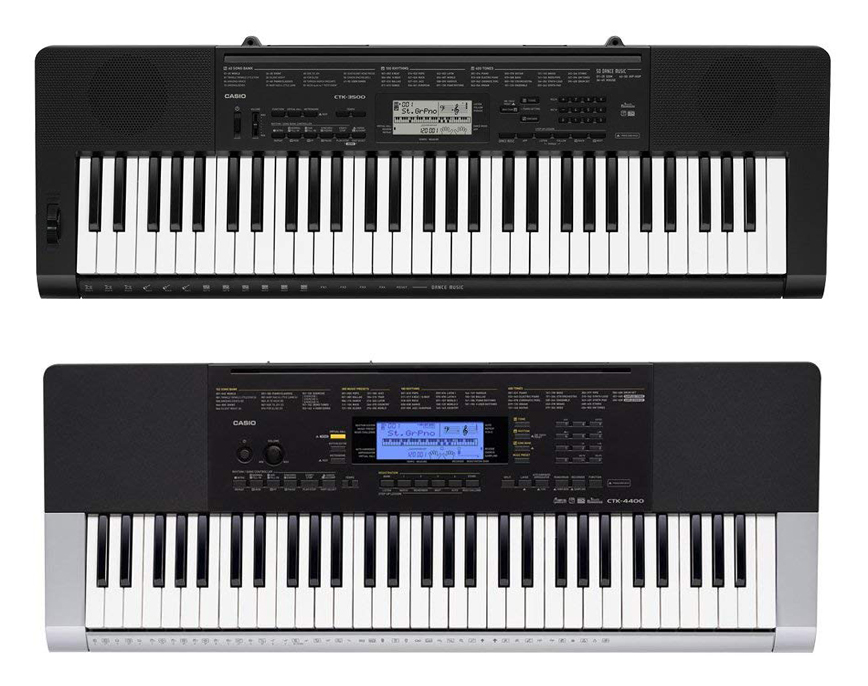 About Casio CTK 3500
Among those many manufacturers out there, Casio is undeniably among the best with their line of electric pianos that cover both new players and beginner to those with more experience or professional. Casio CTK 3500 is among the new releases from the company because it is launched not long time ago around the beginning of last years and not only offer you a quality just like their other pianos, but this one also comes packed with all the tones and rhythms to help new players getting used to how the instrument is played.

Casio CTK 3500 Design
No matter how you look at it, Casio CTK 3500 is indeed attractive and made with a style to not look boring even though there is nothing extraordinary happening on the surface. Since this is a piano that aimed towards children/beginner, this one is only sporting 61 keys to let your children easily playing the instrument and more focus on basic first, so those who are looking for 88 keys will need to look somewhere else. Measuring only 946 x 307 x 92 mm and weigh no more than 3.4 without the batteries, you can easily store them when not in used.

Casio CTK 3500 Features
As an electric piano that mainly marketed for children who would like to learn and starting their journey, Casio CTK 3500 is coming with a touch response keys which is great to let the player getting used to the real ones. However, different from most adult version, this piano only have 2 level of sensitivity compared to 4 or 5. This means that the piano will emit a harder sound just like the real ones when you play the key harder as well while when you press it less hard, it will be less loud. 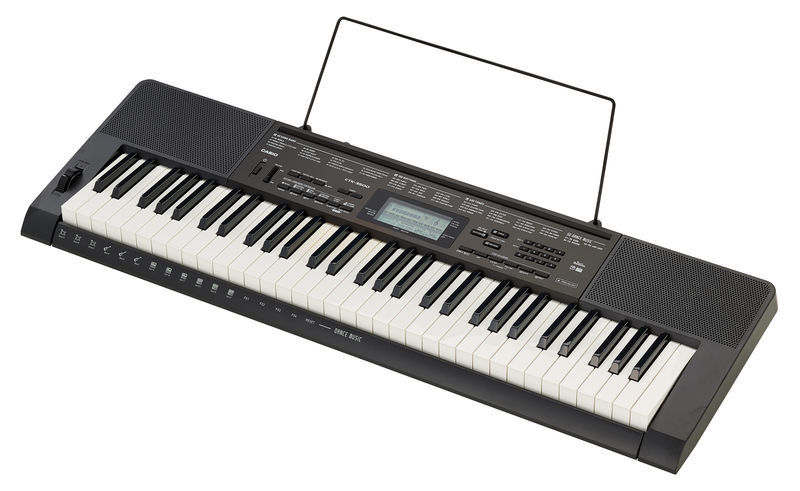 It is common for children pianos to comes with such an astonishing amount of tones and this piano also packed with more than enough 400 tones that cover a wide selection if instrument to support your children creativity, so they can play various genres. Casio CTK 3500 also has 100 rhythms including 36 ethnic rhythms and 10 patterns for piano play, so if you or your child interested in ethnic music, they also can get an access to them too especially Latin. Read also: Casio SA 76 vs SA 46 here.

For those who are asking how many polyphony this piano has, well unfortunately it is just like many other beginner’s pianos out there that use 48 polyphony which is actually enough to play many songs as long as they don’t need to learn very complex music from the beginning. The step up lesson is good to provide support since it will break songs into short phrases. If there is a problem with the playing, this piano will help by calling out finger numbers in a simulated human voice.

About Casio CTK 4400
If you think that Casio CTK 3500 still don’t provide enough features and capabilities to help your children or you improve piano skills quickly or you just need to see another better offering, check the CTK 4400. This piano is very similar with the previous unit but it has better features on some sides yet still coming with all the useful features mostly for new learners. For starter, this piano is coming with more built-in song as well as an additional feature on it entertainment side.

Casio CTK 4400 Design
It is fairly easy to differentiate CTK 4400 with other model because you can see the label on the face and comparing between the two mentioned products, we can see that this one indeed looks like an upgrade with blue screen while half of the unit is no longer black but silver. The control panel is still accompanied with easy to understand label for each function but now the layout is changed such as the power and volume that now used a control wheel as opposed to switch. 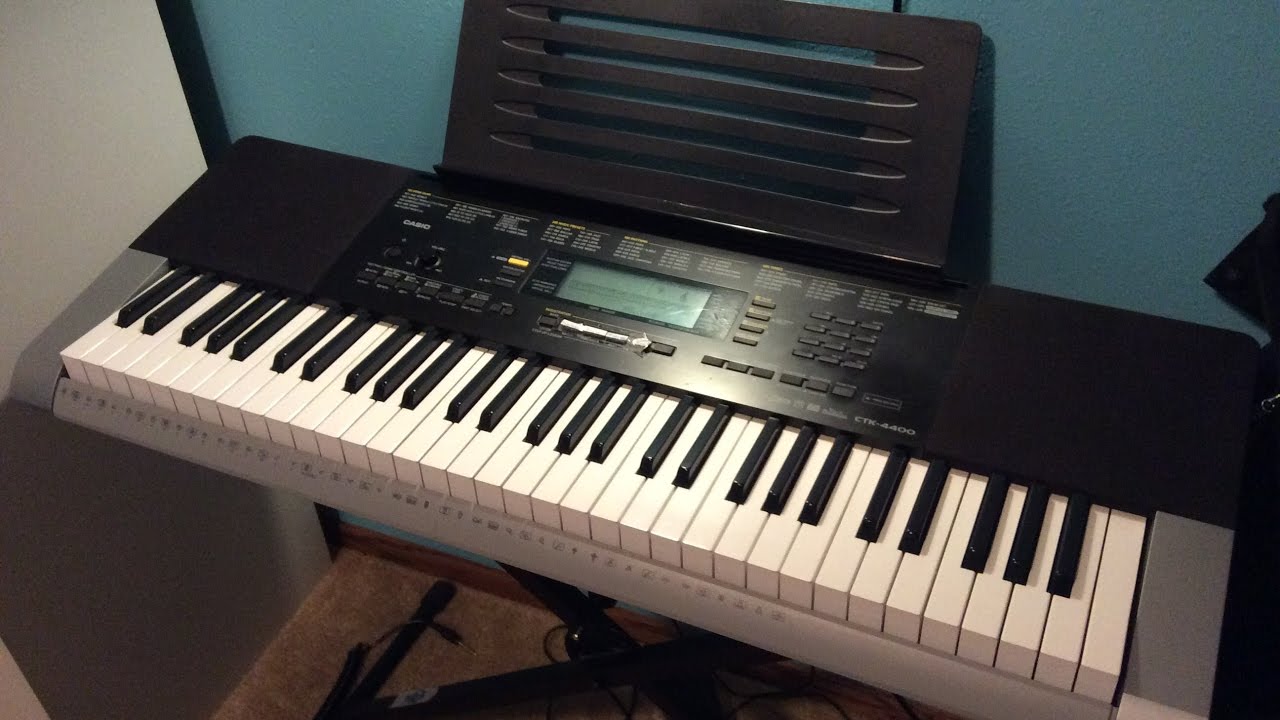 Casio CTK 4400 Features
As you can see, CTK 4400 is still sporting 61 keys and just like the previous piano, it is also still coming with 48 polyphony, so as long as you don’t used it to play complex song, there shouldn’t be any dropping sound. Key response is used here to let the player getting used or at least have an idea on how real acoustic piano is played and just like what you may already know, this feature will make the piano give louder response along with harder press.

CTK 4400 is coming with a whopping 600 tones from a wide selection of musical instrument to support various genres, 187 rhythms, 152 song bank, and song expansion. Song expansion is very useful when you want to add another song from external sources for just listening from the keyboard speaker, play along or even lesson but the 320KB capacity makes it only can store few songs depend on the size.

Comparison
Now, let’s compare Casio CTK 3500 with 4400. As it has been mentioned earlier, CTK 4400 is better in various sides, such as more song, tones, and rhythm along with the song expansion feature which is not available in the other piano.

Conclusion
All in all, the decision is all yours to make. In our opinion, it is good to pick the one that will suit your need but if you are looking for the better among them, we will recommend you Casio CTK 4400.