No matter what instruments we are playing, practice makes perfect and for those who are learning how to play the versatile musical instrument called piano, Alesis Recital Pro vs Roland FP 10 are two good choices to accompany the journey. They are not only sound beautiful but also affordable enough for many of us to get and the fact of being digital instruments requires them to be compact and low maintenance. If you are also eyeing these models, go see what we can expect from them below. 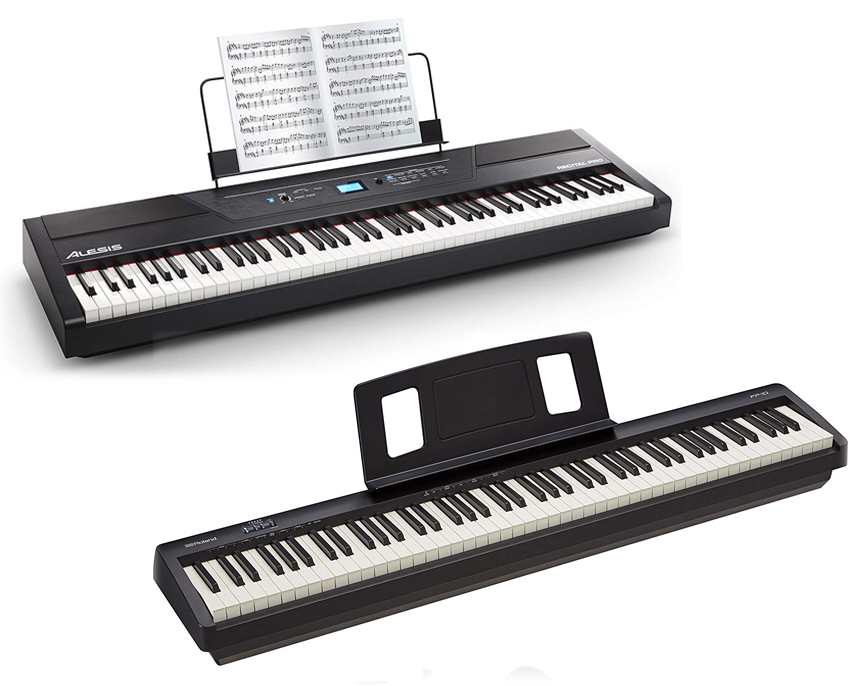 Digital Piano
Everybody loves a music genre or two, three, and so on but we bet almost all of us also have favorite instruments to listen on their favorite songs such as electric guitar or electronic sounds. Musical instruments are one of the most popular subjects learned by so many people whether you are going classic or modern and while most of us have preferred sounds to listen, it is also true that piano is one of the most versatile and beautiful instruments to play even today.

Piano and guitar are probably the most popular musical instrument played by both professional and casual players because we can literally play anything with them and especially for small children or beginners, parents seem to encourage their child to learn the former often. Piano is indeed a versatile instruments but as many people already know, the acoustic model is not very affordable for many of us and with practice makes perfect, players ideally have to own the instrument at home for practicing.

This is where electric or digital pianos come to rescue because despite modeled to mimic the real piano, they are pretty much more affordable or even far cheaper than an acoustic pianos. It doesn’t mean that all of them are cheap but they do come in a wide range of prices to suit your particular level of playing and budget. In addition, unlike the acoustic version, we don’t have to provide a meticulous care nor tuning them from time to time for the sound comes digitally.

Digital Piano Features
The fastest way to shop for digital or electric piano is by deciding the budget first because then we can eliminate the countless choice in one step but, digging deeper, you may want to pay attention to some of their capabilities thus, we can get the most ideal choice that match your preference. For bigger children or adults, the most important is getting a full 88-key piano since we are going to use all of them for harder piece and it is very necessary for the development.

The next part is sound and while it can be quite subjective from one player to another, trying to check the sample sound can be a very nice decision. In addition, there must be weighted keyboards to mimic the real feeling of playing an actual instrument with sensitivity adjustment. If you are going to record the sound for mixing, output like USB to computer and additionally a collection of sounds will be very useful as well.

About Alesis Recital Pro and Roland FP 10
When you already list down what to include or must have features in the piano, now is the time to shop for one and the fact that we do have so many of them in the market may require us to shop a bit longer. However, for those who want to quicken the process and get the perfect choice fast, it is good to start from the popular brands because they have a higher chance of carrying your desired model and in a competitive price range. 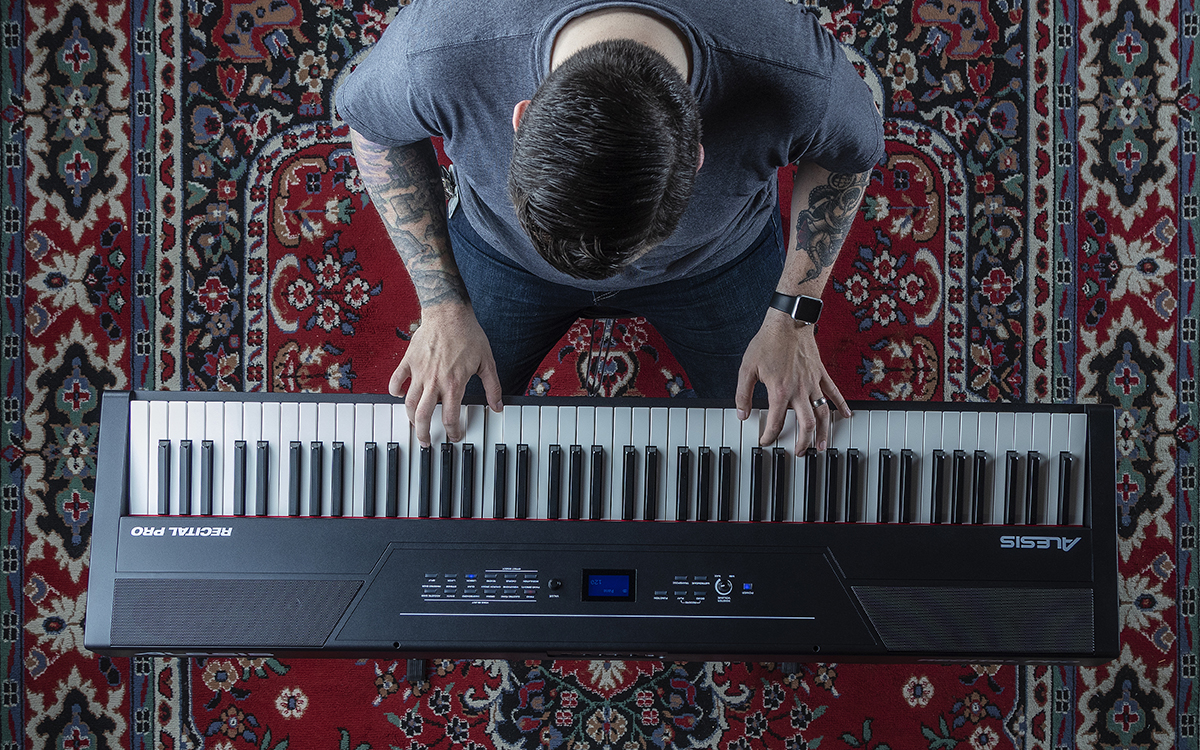 Among those many companies that offer electronic or digital instrument, we are sure most are already familiar with Alesis and Roland because they are two of the biggest players in the market besides other brands like Yamaha and Casio. Not only beginners or casual players, they also have products marketed for more experienced users or professionals depend on which suit you better and if you are looking for those made to not drain the wallet but still good, the Recital Pro and FP 10 are a very ideal choice to look at.

Both of them are made for beginner and we are sure most people can tell it instantly by seeing the price range for they are very affordable and won’t require you to spend more than $500 to bring one home. Alesis may not be as popular as Roland but they are one of the most amazing choices for budget digital piano and the Recital Pro is released to renew the Recital model with almost identical capabilities but they do claim to upgrade the cabinet design and sound collection.

On the other hand, we already talked about many of FP piano from Roland in which one of them is Roland FP 30 Vs FP 10, and as the name suggests, this FP 10 piano is the basic model from the collection which makes it not only interesting to look at but most importantly cheaper. What makes us adore the new release is it already using the technology we can find on the big brothers such as weighted keys and sound engine.

Alesis Recital Pro and Roland FP 10 Design
Surprisingly, despite coming from the same price range, Alesis Recital Pro and Roland FP 10 are quite different in terms of design because as you can see on the sample picture above, the former even integrate a small display among its control panel while the latter is keeping things simpler by only featured with several buttons or 4 to be exact so we can guess that it is utilizing key combination to perform most of the tasks. But, worry not since they are all labelled so we don’t have to memorize them.

Talking about dimension, both of them are actually slim enough to be a gig pianos but, it is also true that FP 10 is by far one of the slimmest piano by only measured at 10.1-inch deep while Recital Pro is at 13.8-inch deep. Yet, the width of these pianos are similar between 51.6 and 50.5-inch the same with the thickness at 5.5-inch. We don’t see both Alesis and Roland to have another fashion of the pianos so we are stuck with the standard black color.

Alesis Recital Pro and Roland FP 10 Keyboard
The most important point to look at a digital piano is the keyboard since it will affect your whole experience and as many other pianos in these price range, they are weighted which means the keys are made to mimic the feeling of playing a real acoustic pianos. They are using hammer actions as well as adjustable to several different sensitivities or if you prefer, deactivate it altogether with Fixed setting. What’s different is FP 10 provide one more level called Super Heavy for the widest dynamic.

Alesis Recital Pro and Roland FP 10 Sound
On the sound technology, Alesis don’t mention what engine used to sample the sound and it is actually quite nice but not the best yet from this price range for there are some places needs to be improved. For Roland, like many of its pianos, FP 10 together with FP 30 and FP 60 are coming with the popular SuperNATURAL sound engine and it is the standard or low-entry from the company unlike higher model like FP 90 so it is only sampled piano tones with some modeling on top of them. 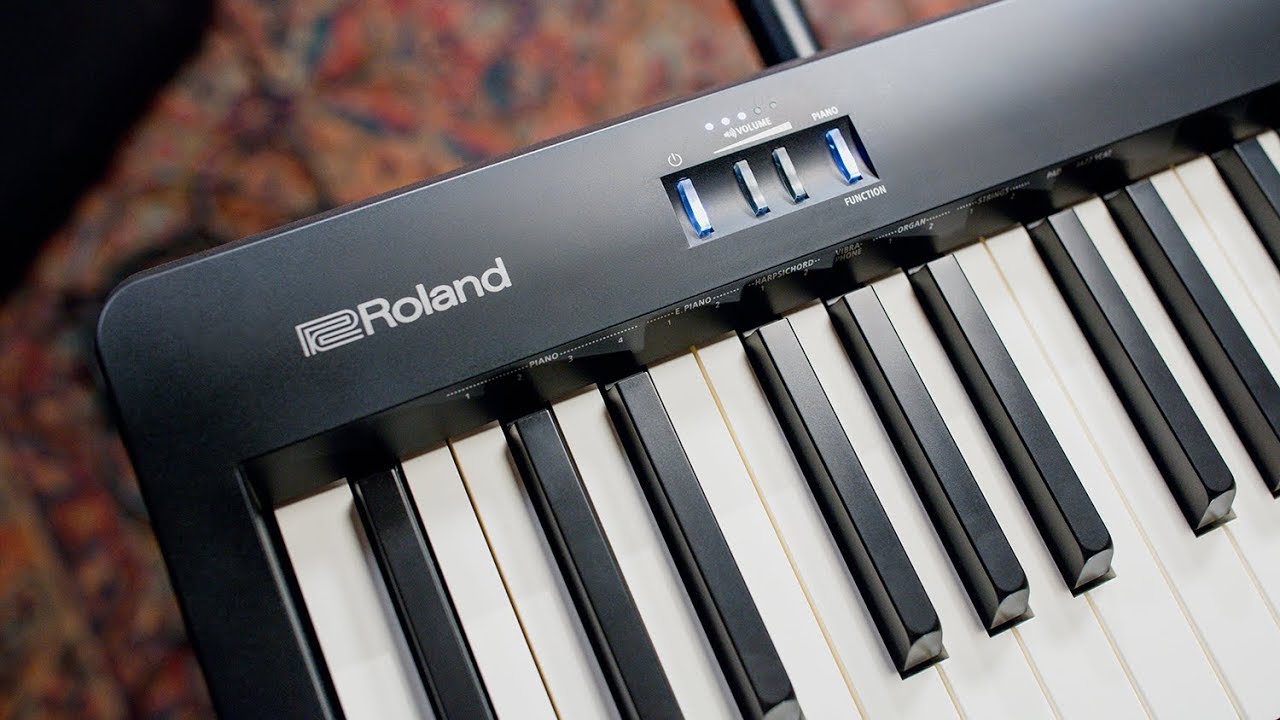 To add into their versatility, Alesis Recital Pro is packed with 12-built-in tones from 6 instruments and 2 variations but, the best thing about it is that we can access all of them from dedicated buttons which is more convenient than using combination key in Roland. On the other hand, FP 10 has 15 built-in sounds, yet what’s interesting is that we can actually access 35 different sounds by using Roland Piano Partner 2 app and additionally, we can even adjust Ambience and Brilliance within 0-10 range for better fine tuning.

However, when it comes to polyphony count, Recital Pro will wins in this section because the model is already coughing up 128-notes and on the other hand FP 10 is still counting at 98-notes. It is not a bad bargain though for we can still play complicated piece just fine.

Alesis Recital Pro and Roland FP 10 Output
Moving further on the output part, both of them are coming with their own amplification so we can play in an instance but the speaker in Alesis does scream louder since it is a pair of 20W output while most pianos like FP 10 is only packed with 6W speakers which means it will also produce subtler sound. However, if you are going to practice in the middle of the night or don’t want to disturb your roommate, both of them are also featured with headphone jack for practicing silently.

Alesis Recital Pro and Roland FP 10 Features
On the additional features, Alesis Recital Pro and Roland FP 10 are quite similar because they will allow you to play by layering two sounds and splitting the keyboard to have the same middle C. But, Alesis is more versatile for it will also offer the ability to split the keyboard in half and play different sounds and we can even do two modes at the same time as well. This mode will split and layer keyboard at the same time so one side is layering sounds while the other side is playing a single sound.

Comparison
Both of them are a very ideal choices for those with limited budget or beginner players looking for their training instruments but, Alesis Recital Pro and Roland FP 10 are also different. In terms of sound quality, we do think Roland sound better and the app we can use it with also provide access to the rest of the sound collections like in FP 30, as well as providing options for fine tuning. However, Alesis is also interesting by offering more convenience operation.

Additionally this piano is also coming with bigger speakers so you may not need an amplifier anymore to fill up a room and it will offer few features or modes that can be useful in your practicing or recording that are not available in FP 10.

Conclusion
We are sure most readers can already decide to go with which piano because they are quite different but, for those who are undecided yet, we do like Roland FP 10 better for it has nicer sound and slimmer for transporting but we also like its ability to fine tune and additional sound collections from the app.